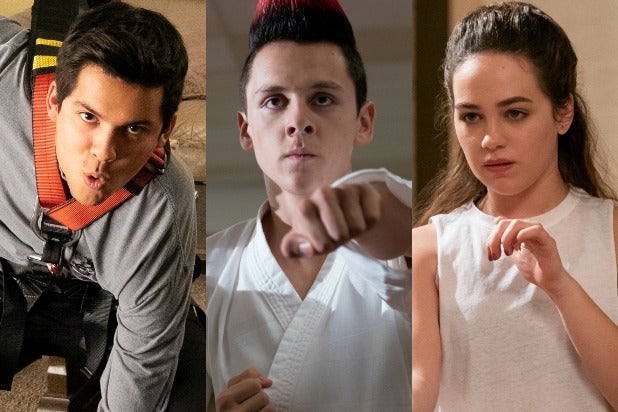 (Spoiler alert: We’ve tried to keep potential spoilers to a minimum in this story, but perhaps do not read on if you want to remain completely in the dark about certain plot points in Season 3 of Netflix’s “Cobra Kai.”)

“Cobra Kai” is back, and we’re doing spinning heel kicks in excitement. But just how good are the actors at the art of self-defense, which is all too often used as aggressive offense by the bad kids in the hit Netflix series?

We last asked the cast about their karate skills back in April 2019, ahead of “Cobra Kai’s” Season 2 premiere on its former home, YouTube. This time around, ahead of the Season 3 launch on its new streaming home, we asked Jacob Bertrand and Xolo Maridueña for an update on their real-life abilities.

Plus, we caught up with Mary Mouser on her evolving kicks, chops and punches. After all, rival Tory (Peyton List) is not screwing around.

Jacob Bertrand as Eli, aka Hawk
“I think almost everyone has improved a lot. Especially after Season 2, specifically, I think everyone became a lot more passionate about it because there was this awesome scene that we had just finished and everyone wanted to just keep performing at that level.

For me specifically, I know mine has gotten a lot better. I have gotten way more into martial arts and watch a bunch of UFC now. So I’m definitely way, way more passionate about it than I was before. And our stunt coordinators are freaking awesome. They trained us really good and really hard.”

Mary Mouser as Samantha LaRusso
“I had no experience before the show. I actually went into Season 1 not even knowing if my character would ever do karate. I was hired to be a daughter and a girlfriend and that was fine. I was so stoked to do that and be a part of it. But once I saw the boys training I was like, ‘That looks really cool, I really wish I could do that.’ So I started asking and they were like, ‘We have plans, we have plans. Just hold out.’

So I had zero experience going into it at all. No athleticism. I am very, very uncoordinated. It took them two and a half hours to teach me one part of one kick at the end of Season 1. And then I got myself into classes to get me ready for Season 2, where I knew I’d be doing more stunt work. I think it takes me maybe 20 minutes to learn one part of one kick at this point, which is still a little slower. But that’s OK, I catch up eventually, just a little extra work… This is something I’m actually passionate about now and enjoy. It changed for me because of this show, where now this is something I want to pursue for the rest of my career. I hope I get to do roles where I can have the physicality aspect be a part of it because it’s something I really love.”

Xolo Maridueña as Miguel Diaz
“Going into ‘Cobra Kai,’ I didn’t really know what to expect. I remember one of the first days out there, we trained at our warehouse and it was me, [stunt coordinator Hiro Koda], the guy who is now my stunt double, Mark. It was really scary. Having your body move in ways that you’re not used to and having it hurt was something that I wasn’t… But now, fortunately, I know what to expect at least a little bit. So we’re able to have ample time to prepare.

But some of those first days were the roughest ones. My body was, like, just crying. But I think it really is a testament to our stunt coordinators, Hiro and [Jahnel Curfman] — they really work so hard to make sure that we’re able to do all of our stunts and I think that we’re comfortable. I think without them, ‘Cobra Kai’ is not as good as it would be. So I gotta give a shoutout.”

All of that hard work and training pays off in the finished product’s fight scenes — those that take place within a dojo and the many, many unsanctioned square-offs beyond the walls of mirrors. (OK, so there’s not really that many mirrors in TV dojos because of production equipment.)

But which “Cobra Kai” dojo — and which of the several iterations of said dojo — would the actors join in real life?

This writer agrees with Hawk — and not just because I need both of my arms to type.

Mouser, meanwhile, is signing up for Season 3’s Miyagi-do.

“It’s enough of both, in different ways. There’s obviously still the heart and the balance aspect, but it’s a little off balance in Season 3, because there is a lot of confusion and some good and bad decision-making,” she said.

We won’t give anything away beyond that, but let’s just say Samantha and dad Daniel LaRusso’s (Ralph Macchio) training goes a bit beyond hands and feet this season.

Also Read: 'Cobra Kai' Stars Talk About That Insane Season 2 Finale Scene: 'It Was Like an 11-Minute Riot'

Miyagi-do and Cobra Kai have some new competition in town — well, in a Reseda park, really. Late in Season 3, Johnny Lawrence (William Zabka) starts a(nother) karate dojo, hilariously titled Eagle Fang. For non-ornithophiles, eagles do not have fangs, but the argument here is that they’re the only animal that can kill a cobra — other than a mongoose, which is just lame.

Anyway, that one is Maridueña’s — and Zabka’s; we caught up with him, too — choice.

“I’d say this season’s Johnny’s dojo, Eagle Fang, is probably the one– I think it comes from the best place,” Maridueña said. “I think Cobra Kai was created on some interesting grounds, as we’ve seen in ‘Cobra Kai’ Season 3 how Cobra Kai was created. And I think Johnny really has the best intentions creating Eagle Fang. I think whether or not those kind of show with his students is another story. But I think in terms of what message he’s trying to put out there, I think Eagle Fang is the closest I’m aligned with.”

His forever sensei (we hope) agrees.

“I would root for Eagle Fang, even though it’s a work in progress,” Zabka told TheWrap. “Miyagi-do, listen, the great thing about Miyagi-do and the authenticity of martial arts and the origins of martial arts before they were introduced to the States, that’s what I love about Season 3, is how Daniel does a deep dive and goes into Okinawa and puts some truth to the magic. And what the soul and the vitality and the mindset, all that, is.

“So if there was a way to bring them all together into one melting pot and take off some of the rough edges and some of the soft spots, I think you’d have a good one,” Zabka, who co-executive produces the “Karate Kid” sequel series along with Macchio, continued. “It’s really about the teaching when it comes to a real dojo. It’s about the teacher and who taught them and what they bring them.”

Season 3 of “Cobra Kai” premieres on Netflix on Jan. 1, 2020. Seasons 1 and 2 are also available on the streaming service.