Terry Silver (Thomas Ian Griffith) is back to terrorize Daniel LaRusso (Ralph Macchio) — and a whole new generation of teen karate students in the San Fernando Valley. And it isn’t very hard at all for the “Karate Kid III” baddie to get back into his Cobra Kai gi, Griffith told TheWrap.

For starters, the fit wasn’t so snug: The actor and former real-life karate champ has stayed in shape and continued martial arts since the movies.

“I started training young — it was my sport through high school,” Griffith told us ahead of the “Karate Kid III” sequel series’ fourth season. “I’ve kept up some form of training throughout my entire life. If I miss a day or two, my wife is like, ‘You haven’t worked out, you go do your thing.’ So it was always there.” 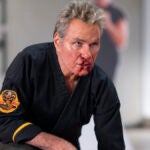 Also not a problem in Griffith’s return? A lack of confidence.

“The first day [of ‘Cobra Kai’ production] I show up and I have the first little action sequence, they have the 6’4” stunt guy with the wig on and [who] looks just like me,” he said. “And I’m watching the monitor — they just had the stunt guys do a pass — I’m watching and thinking, ‘I’m so much faster than that guy. Oh, I kick better than that guy.'”

“Once I do it, I’m like, ‘God that felt great,'” the 59-year-old continued. “Of course, doing it for like five hours… I’m in the bath that night, thinking, ‘What the hell was I thinking?’ But it’s actually been a ball… being able to just bring that skill back.”

Also back is Silver’s trademark ponytail. Or, at least, it’s getting there. On the very first exploratory Zoom between Griffith and the show’s creators, one of them — Griffin thinks Hayden Schlossberg, told him, “‘Don’t cut your hair.'”

“COVID had just come out, and literally I was in my office going nowhere and I hadn’t got a haircut in a year,” Griffith said. “It sort of all worked to my advantage. So for [Season 4], it’s almost there, and now it’s long enough to pull it off, which is very fortuitous.”