Tickets, predictably, are going fast for the Coco tour. O’Brien just tweeted that more dates are being added in New York and Chicago.

"For that second show, I’ll be doing all Liza Minnelli songs," O’Brien tweeted.

Don’t be surprised if other big cities like LA and Vegas get extra nights as well.

O’Brien also asked fans to go directly to Ticketmaster.com since TeamCoco has been jammed with traffic.

"Hey Internet: I’m headed to your town on a half-assed comedy & music tour. Go to http://TeamCoco.com for tix. I repeat: It’s half-assed," he wrote.

Conan O’Brien will begin his Legally Prohibited From Being Funny on Television Tour April 12 in Eugene, Oregon, working his way across the United States and Canada over the course of two months.

O’Brien will hit at least 20 states and 30 cities between April 12 and June 14 — including the famed Bonnaroo Music Festival. More dates are expected to be added in the coming weeks.

Coco will tour with sidekick Andy Richter and members of his former "Tonight Show" band, offering up "a night of music, comedy, hugging, and the occasional awkward silence," promoters promise.

“It was either a massive 30-city tour or start helping out around the house” O’Brien said in a statement provided to TheWrap by his publicist.

Jeff Ross, O’Brien’s longtime producer on both "Tonight" and "Late Night," has been using his music promotion roots to help spearhead the organization of the travelling revue.

He said there was a very good reason for taking The Coco Show on the road.

"If we don’t get Conan in front of an audience soon, there’s gonna be real trouble," Ross told TVMoJoe.

TheWrap first reported news of the tour last month. O’Brien is expected to make an official statement about the tour to his followers Thursday morning via his Twitter account.

Tickets will be available for purchase via O’Brien’s new official website, TeamCoco.com, or via Ticketmaster. They’ll range in price from as little as $34 to as much as $79 (though a few casino dates may be priced higher, while the usual VIP packges offered by promoters will run in the hundreds of dollars).

American Express has signed on as corporate sponsor of the tour. TeamCoco.com will expand in the coming weeks to include more O’Brien-themed content. 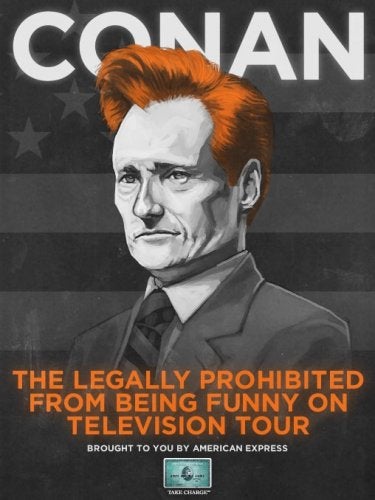 After spending the first few weeks touring the northwest — Oregon, Washington, Vancouver, Alberta and San Francisco– the Coco Express will hit Los Angeles April 24, with a date at the Gibson Ampitheater in Universal City — mere feet away from his onetime "Tonight Show" home on the NBC-owned Universal lot.

Up next: stops in San Diego and Phoenix, followed by a May 1 visit to the Palms Casino in Las Vegas. O’Brien then heads north again (Reno, San Jose, Sacremento) before cruising east (Boulder and Denver). The tour hits the south on May 13 (Dallas) and May 14 (Austin), headed back north Minneapolis (May 18), Chicago (May 19), Toronto (May 22) and Altantic City (May 30).

The final east coast leg of the tour finds O’Brien returning to two of his home cities: New York on June 1 and Boston on June 4. And yes, while in the Big Apple, O’Brien will play Radio City Music Hall — located right in the center of NBC’s 30 Rock corporate headquarters.

After dates in Connecticut, Pennsylvania and Washington, D.C., O’Brien hits the tents of Bonnaroo June 11 before wrapping the tour June 14 in Atlanta.

If all goes well, O’Brien might then leave the road and begin preparing for a new late-night talk show. Fox and O’Brien’s camp are continuing to research the economic feasibilty of launching a new show on the network.

Ross said he and other members of the O’Brien camp began discussing the concept of a tour while they were putting together their final week of shows at NBC in January. O’Brien got particularly pumped when he performed "Free Bird" with Will Ferrell on his final show.

Along with O’Brien’s manager, Gavin Polone, Ross asked the music and touring unit of William Morris Endeavor (where O’Brien is repped) to begin looking into whether venues would be interested in an O’Brien tour.

According to Ross, there was more interest in the idea than anticipated. Once O’Brien’s "Tonight" tenure wrapped, he and WME began actively shaping the event.

The massive tour, along with O’Brien’s near-daily tweets, are allowing the former late-night host to keep up some of the massive momentum he got from his final weeks on the air at NBC. O’Brien’s exit agreement with the Peacock doesn’t allow him to perform on television, but doesn’t keep him from appearing live.

There had been talk about taking the revue overseas to the UK and pehaps other countries in Europe. For now, however, there’s no plan to do so.