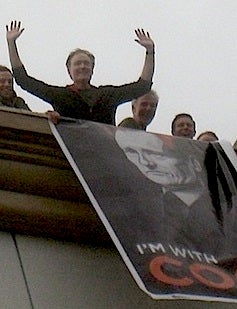 The "I’m With COCO" Facebook phenomenon (which boasts more than 300,000 fans  bills itself as a "religious organization") spilled onto the streets in at least four cities. Various news outlets reported as many as 300-400 people at the Universal City demonstration, with smaller groups in Chicago, New York and Seattle.

The L.A. crowd began gathering around noon at Universal Studios — where O’Brien tapes "Tonight" — on an unusually rainy day, with frequent and intense downpours. Many wore orange in support of their ginger-haired hero, who at one point ran down Lankershim Blvd. and later sent pies from the corner pizzeria to feed the chanting, rain-soaked throng. (The rain let up after O’Brien appeared, prompting many to yell, chant and tweet "Conan stopped the rain!")

O’Brien later took to the roof of his studio and, with the now-iconic "I’m With COCO" banner flying over the edge, waved to supporters below in a scene that looked more like a political demonstration than a late-night lark. Richie "LaBamba" Rosenberg, the trombonist for O’Brien’s band, made a drive-by appearance in the back of a pickup truck, enclosed in a popemobile-like glass case.

The rally went on into the afternoon, with supporters chanting anything from pro-Conan slogans to anti-Jay rants — "No big chin! No big chin!" was one such incantation overheard at the Chicago rally, which appeared to have a turnout in the dozens. A similar scene played out i New York, where demonstrators near NBC’s Rockefeller Center were confined behind police barricades. 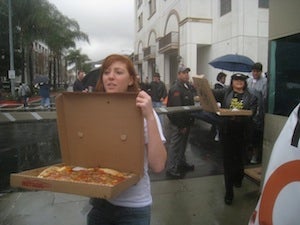 North Hollywood police, whose jurisdiction includes parts of the studio lot in Universal City, told TheWrap that no incidents were reported and that they were merely keeping an eye on the situation. NBC did not immediately respond to a request for comment on the rally.

As rallygoers were peeling away from the scene, many began posting pictures, videos and dispatches on Twitter and Facebook, where the current late-night crisis has been a hot topic in the days since NBC said it was moving "The Jay Leno Show" from its failed 10 p.m. slot to 11:35.

A couple of user videos below; this one from Los Angeles …