“CODA” made history on Oscar Sunday and won the Academy Award for Best Picture, a first for both Apple Studios and the Sundance Film Festival.

“Ow wow, thank you to the Academy for letting our CODA make history tonight,” producer Philippe Rousselet said, who directed the 2019 on which “CODA” is based.

Producer Patrick Wachsberger added: “I really want to thank the academy for recognizing a movie of love and family on this difficult time that we need today and this is ‘CODA.'”

Awards aside, “CODA” from writer-director Sian Heder, resonates as a loving depiction of a deaf family and their hearing daughter (“CODA” stands for “child of deaf adults”), Ruby (Emilia Jones), who must navigate between her family duties and her desire to strike out on her own. Unlike “La Famille Bélier,” the 2014 film on which it’s based, all of “CODA”s deaf characters are portrayed by deaf actors. By foregrounding deaf perspectives and the Rossi family’s authentic bond, “CODA” is both a win for visibility and a winning coming-of-age story. 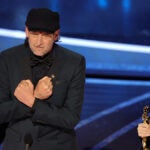 The film premiered at last year’s Sundance Film Festival to immediate acclaim, scooping up four awards including the U.S. Grand Jury Prize and U.S. Dramatic Audience Award, before selling to Apple for a record $25 million.

Set in a small Massachusetts seaside town, “CODA” chronicles the life of Ruby Rossi (Emilia Jones), parents Jackie (Marlee Matlin) and Frank (Troy Kotsur) and brother Leo (Daniel Durant) during Ruby’s senior year of high school. As the only hearing member of her family, Ruby serves as an interpreter for their fishing business while trying to blend in at her high school. When her choir teacher Mr. Villalobos (Eugenio Derbez) helps her discover her singing voice at the same time her family launches a new business, Ruby is torn between pursuing her passion and remaining by their side.