“A Serious Man,” the latest drama-comedy-tone poem by writer-directors Joel and Ethan Coen, is unexpectedly Jewish. Set in their home territory of Minnesota circa 1965, the film feels autobiographical. Michael Stuhlbarg  plays Larry Gopnik, a professor (the brothers’ father was a professor), whose wife is set on leaving him and whose children ignore him. Larry seems powerless to change his fate, even as he searches for meaning in his ancient tradition. The film opens with a lengthy scene entirely in Yiddish and set a couple of centuries in the past.

Sharon Waxman got to grill the Coen brothers at the Toronto Film Festival last month. The movie opened in six theaters on Friday, and will roll out successively in coming weeks. 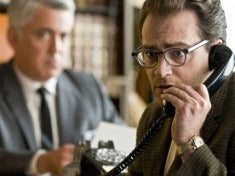 Aren’t people going to say this film is way ‘too Jewish’?
Joel: (rubs sleep from his eyes)
Ethan: If we were going to make it at a budget that was not crazy, it wouldn’t be.
Were you trying to avoid Hollywood ethnic types?
Ethan: I’m not sure what that means. This is a domestic drama in the Midwest. It’s not a Neil Simon comedy.
This is your 15th movie. Would you have been able to make this movie if you hadn’t won an Oscar?
Joel: Well, it helps if you’ve done stuff. It wouldn’t have been easy if it hadn’t been done on the heels of (“No Country for Old Men”).
This movie is about the apparent capriciousness of God, yes? That bad things happen to a good man.
Ethan: In his case, it all does seem very strange. It’s like a mistake has been made.
Joel: We consider ourselves very lucky.
Yes, sometimes it seems like you think you’ve just been lucky, and that you wonder if the world is ever going to find you out. Do you?
Joel: When we were doing "O Brother Where Art Thou," we thought so. We thought, "We’ve f—-ed it all up."  But it totally worked out. We’ve often paused and thought, "We really stepped in s—." But it usually works out.
Is this movie autobiographical? Some have said it seems as if it is a retelling of Job. Which is it?
Ethan: (surprised) That’s a natural association to make. Job is a man whose faith is being tested. But this is not that. As for being autobiographical, it’s very much so in terms of the setting —  the Jewish community in the suburban Midwest. But the story has nothing to do with our domestic situation. Ours was boring, normal.
Michael Stuhlbarg does not react much. How much did you want Larry Gopnik to be someone who essentially is an observer of his own life?
Joel: He’s a passive character, and it’s difficult to play. You have to keep the audience interested and engaged, and it’s a hard trick for an actor to pull off. Billy Bob (Thornton) had to do it in “The Man Who Wasn’t There.” You kind of wanted to kick him in the ass a bit. He’s a doormat.
Ethan: Maybe the temptation for a bad actor is to be bigger.
Joel: The tricky thing with Michael is, how do you get comedy out of it without being big? Michael had a soulfulness you want to watch throughout the movie.
As directors, how do you get across to an actor so that you can be trusted?
Joel: I don’t know. We’re pretty nonthreatening. We’re collegial guys.
And what’s this we hear that you’re remaking "True Grit"?
Ethan: It’s not definite. It’s a really good book.
With Jeff Bridges?
Joel: Hopefully. We’ll see. We don’t have a go-ahead on this.
x
Looks like you're enjoying reading