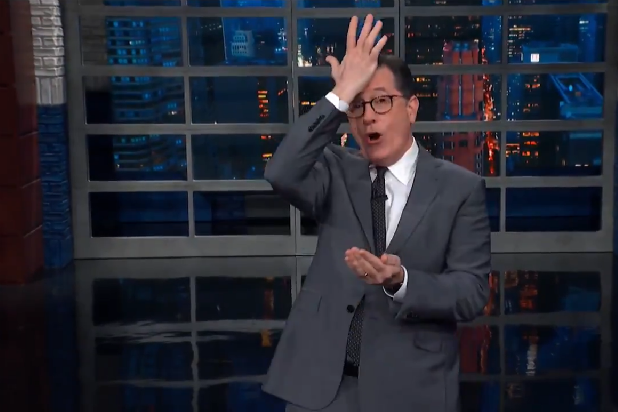 On Tuesday’s “The Late Show,” Stephen Colbert had some fun at Donald Trump’s expense after Trump offered French firefighters some unsolicited advice for saving Notre Dame that turned out to be extremely incorrect.

On Monday, as the 856-year old cathedral burned, Trump tweeted: “So horrible to watch the massive fire at Notre Dame Cathedral in Paris. Perhaps flying water tankers could be used to put it out. Must act quickly!”

“Does he think every time there’s an emergency in France, they’re like ‘Claude, ze Cathedral is on fire! We must check Donald Trump’s Twitter feed,” Colbert said, adopting an extremely fake French accent. “Quelle horreur! Sacrebleu! He says we must work quickly!”

Colbert then noted how, in response to Trump’s tweet, France’s Sécurité Civile, which runs the country’s firefighters, explained why aerial firefighting isn’t on the table. “All means are being used, except for water-bombing aircrafts which, if used, could lead to the collapse of the entire structure of the cathedral,” the group said.

“For firefighters, they really know how to give a sick burn,” Colbert joked.

Also Read: Shep Smith Shuts Down Guest Who Suggests Notre Dame Fire Might Not Be Accidental

There’s more, including Colbert’s amusing chef’s kiss motion, and you can watch the whole clip below:

TONIGHT: Trump does what he does best: give bad advice. #LSSC pic.twitter.com/uuLeUGFClC