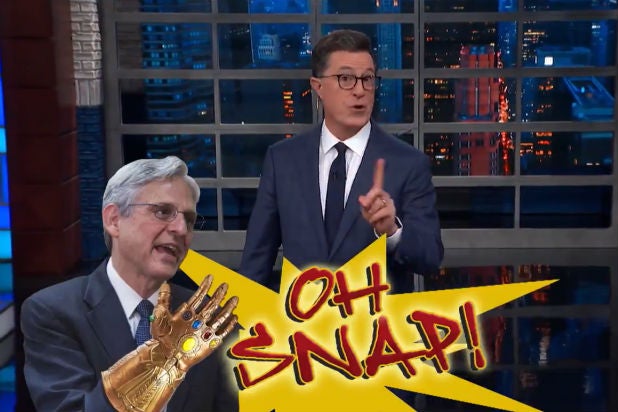 On Tuesday’s episode of “The Late Show,” Stephen Colbert celebrated what he considers some really excellent news regarding Donald Trump with a really terrible pun. Not that we don’t love terrible puns, of course.

At issue is the Trump’s ongoing lawsuit to keep his accounting firm from turning his financial records over to Congressional Democrats. Colbert noted that on Monday, a federal judge upheld a Congressional subpoena, and now the case will go to the Washington, D.C. circuit court of appeals.

As it happens, the presiding judge at that court is none other than Merrick Garland, the man President Obama nominated to the Supreme Court in 2016. But Senate Republicans, led by Mitch McConnell, refused to even hold hearings until after the election. We all know the rest of that story.

Also Read: Why Seth Rogen Dreads Promoting Movies Like the Russo Brothers' 'You, Me and Dupree'

“That guy’s court gets to rule on Trump’s financial records. And for the first time since 2016, he can wake up and say, ‘It’s a good day to be Merrick Garland,” Colbert joked.

There’s plenty more, and you can see for yourself in the complete clip. Watch it below:

TONIGHT: Living proof that karma is real and it comes in the form of an old acquaintance from the Obama era. #LSSC pic.twitter.com/3JX8rXN1Qp