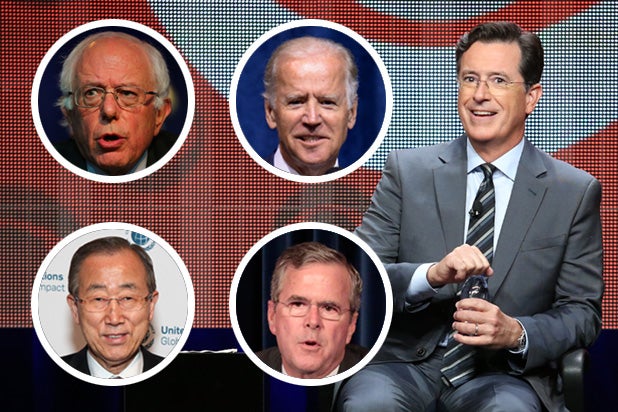 “The Late Show With Stephen Colbert” has not premiered yet, but the show is already breaking new political ground for late-night television.

In his first two weeks on the air, the former “Colbert Report” host is taking a different approach to assembling his initial lineup of guests than his broadcast late-night predecessors did. Colbert’s first two weeks will find him interviewing not only some of the hottest names in entertainment, but also luminaries in the business and political worlds as well.

“God knows there are going to be a lot of opportunities for comedy going into the election year,” CBS entertainment chairman Nina Tassler told TheWrap. “Stephen’s show will be entertaining. There will be great interviews. There will be taped segments. And you can count on him for a humorous analysis of what’s happening on the political landscape.”

Inviting such high-profile political figures to join him during his first few weeks on the air represents a major shift from what other hosts did in their first weeks.

David Letterman did interview then-Vice President Al Gore during his second week as host of “Late Show” in 1993, and Seth Meyers interviewed Biden for the first episode of his “Late Night” tenure in 2014. But no other broadcast late-night hosts enjoyed the company of so many powerful political figures at the start of their tenures as Colbert.

More recently, when Jimmy Fallon took over for Leno in 2014, he interviewed Will Smith, Jerry Seinfeld, and Bradley Cooper in his first week.