North Korean dictator Kim Jong-un has lost a bit of weight recently, something a lot of people all over the world feel a need to comment on. That includes “The Late Show” host Stephen Colbert, who opened up his Monday night episode with a cold open video that tries to figure out just what Kim’s secret is.

The answer: basically Jane Fonda but, you know, more dictator-y.

Like always, the cold open began with a recap of the topic using news clips. Then, the joke gets underway with footage of Kim giving a speech, but with the dialogue changed to him talking about his workout, which becomes an advertisement for “Uns of Steel” (get it?). 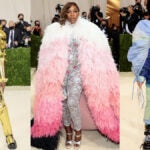 Also Read:
The Craziest, Most Decadent Looks From the 2021 Met Gala (Photos)

“When one catches a glimpse of your glorious melon, they will say ‘Pyeong-Dang,'” the pitch promises. Also, people who order the video, we’re told, will also receive a one-year supply of his health supplement, “Kim Fast.” Watch the clip below: