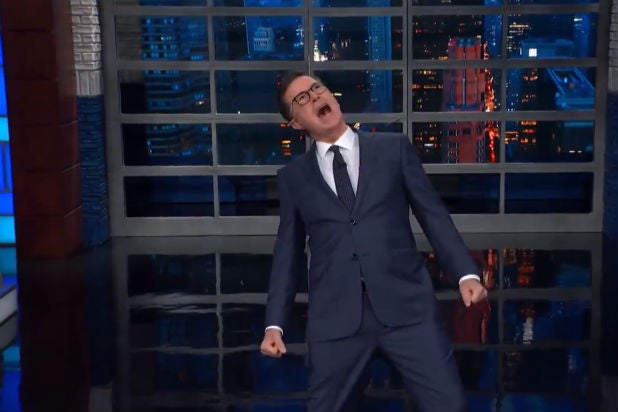 On Monday, Stephen Colbert took a bemused look at Donald Trump’s latest foreign policy weirdness and imagined how it might apply to significant moments throughout American history. He also, as has frequently been the case lately, deployed a pretty bad-good-bad pun.

On May 31, President Trump threatened to impose a new tariff on Mexico unless it curbs what he said was “illegal immigration.” Trump then announced last Friday that the tariffs wouldn’t happen because he reached a new agreement with Mexico. It was subsequently reported that the deal wasn’t actually new at all. Trump responded by asserting that he was actually talking about a secret deal to be announced later. And then, Mexico’s foreign minister pretty much said that wasn’t true. Yes, it’s weird.

“So Trump is just taking credit for deals that were already in place,” Colbert said during his opening monologue. Then, he transitioned into his Trump impression, listing off other ways POTUS could do that: “I’m also proud to announce that the Berlin Wall is coming down. The hostages have been released by Iran. And I have purchased Louisiana from France.”

As for the pun, it happens about mid-way through, and it’s a joke about the “Lion King.” (We bet you can guess it in advance.) See for yourself below.