Stephen Colbert is baffled by twice-impeached former president Donald Trump’s dinner with Ye, formerly known as Kanye West, this week. But the late night host is more confused by the rapper this time, rather than the fact that Trump had dinner with two known anti-Semites.

It was revealed this week that Trump hosted both Ye and known Holocaust denier Nick Fuentes at Mar-a-Lago for dinner last week, prompting widespread backlash. But apparently Ye also used the meeting to ask Trump if he would consider being Ye’s running mate in the 2024 presidential election, instead of running for re-election himself. And Colbert couldn’t quite wrap his head around the mechanics of that team-up.

“How would that even work? Can you send a mob to hang yourself?” Colbert mocked, before imitating what chant Trump would suggest. “Find my neck! Find my neck!” 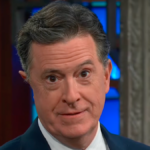 Also Read:
Colbert Comforts Elon Musk for Losing Over $100 Billion: Everyone Has to ‘Cut Back on How Many Cars We Shoot Into Space’ (Video)

According to reports, Ye’s request angered Trump, to the point that the twice-impeached former president began yelling at the rapper, and insulting his ex-wife, Kim Kardashian. But, Colbert joked, Trump yelling at someone during at meal at Mar-a-Lago probably isn’t too out of the ordinary.

“That’s just how Mar-a-Lago celebrates guests’ birthdays,” he joked. “‘I hear someone’s turning five, you know what that means! The former leader of the free world is here to scream about ballot dumps!'”

That said, in the days following the dinner, which Colbert called “a multi-course tasting menu of crazy,” Trump’s posts about it reflected a much different mood. In one post to his Truth Social account, Trump wrote that he and Ye “got along great” and defended his choice in inviting the rapper by saying Ye “expressed no antisemitism” during the meal.

“Not sure that helps,” Colbert mocked, comparing it to having a meal with a serial killer. “‘I had a lovely dinner with Jeffrey Dahmer. We got along great. Left with all my organs!’ 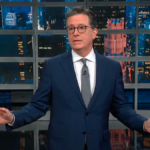 Also Read:
Colbert Celebrates Supreme Court Clearing the Way for Trump Tax Returns: ‘Finally Find Out If He Wrote Off Eric as a Loss’ (Video)
x