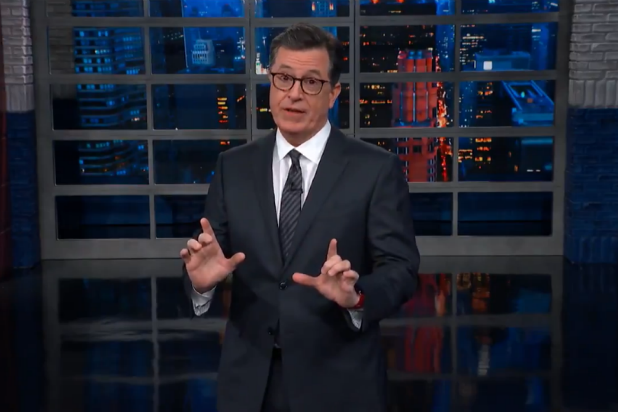 At the top of his CBS talk show Wednesday night, Stephen Colbert took a gander at Trump’s various comments from earlier in the day, or as he described it, “the director’s cut” of Trump’s address to the nation the night before.

Colbert first touched on Trump’s hastily aborted meeting Wednesday with Democratic congressional leaders Nancy Pelosi and Chuck Schumer over the ongoing government shutdown. Trump notably stormed out as soon as they said they wouldn’t pass a budget to fund the wall he wants to build on the U.S.-Mexico border.

Colbert showed a clip of Trump in the Oval Office later saying, “I didn’t want this fight.” Colbert contrasted that with a clip of Trump from just last month, in which he said he would be proud to own responsibility for a government shutdown.

“Mr. President, that guy’s making you look terrible. I don’t know who he is, but you’ve got to get him out of the White House immediately,” Colbert joked.

Next, Colbert played a clip of Trump bragging that his wall actually is “medieval,” “because it worked then and it works even better now.”

“You really cannot go wrong with medieval technology,” quipped Colbert, who then pulled out his Trump imitation. “The wall will be made of steel slats, which top alchemists have assured me can be turned into pure gold, pays for itself. Now if you’ll excuse me, I have a leeches appointment.”

There’s more, and you can watch the whole clip below: