Stephen Colbert opened up the latest “The Late Show” with a cold open gag that mined the horrific effects of climate change for some bleak humor. Hey if you can’t stop the slow motion disaster that could be stopped, you can at least laugh at the stupidity of it, right?

So the joke was inspired by the incredibly disturbing news that, for the first time in American history, the Colorado River has been declared to have a water shortage amid a record drought plaguing the Mountain West and Southwestern states. This is, of course, pretty much thanks to climate change which, as we noted above, the government of the United States doesn’t seem particularly inclined to actually do something about.

We don’t want you to think about what it would mean for the region’s millions of residents if water stopped becoming readily available. No seriously, you need to be able to sleep long enough to have the energy to stockpile Mad Max weapons for the coming wars. Instead, amuse yourself with Colbert’s gag, a fake tourism ad for the region that emphasized the “positive” side effects of this terrifying situation. 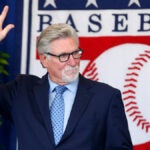 We won’t recap it verbatim — you can watch the clip below — but the gist is that the ad boosts all the fun things you can do in a dry riverbed, like “less drowning,” and skiing on grass. “But bring water,” the ad warns, “’cause we don’t have any.”

Bleak, yes. But since our leaders have decided they can live with the coming disasters, I guess we have to figure out how to. Hooray.

Check out the clip here or in the player above.