Stephen Colbert was none too pleased to hear that the January 6 committee hearing scheduled for Wednesday was postponed due to “technical issues.” Upon learning exactly what those issues were, the “Late Show” host went off.

“They promised us hearings! We can’t let them get away with this. I’m storming the Capitol! Who’s with me?” Colbert joked, before screaming and running around his studio for a moment. But, then he got into the real reason.

Speaking to media on Tuesday, Congresswoman Zoe Lofgren — one of the committee members — explained that “putting together the video and exhibits is an exhausting exercise for our very small, you know, video staff. So we’re trying to … we were going to have 1-2-3 in one week, and it’s just, it’s too much to put it all together.”

“Let me get this straight. So you have to postpone saving democracy because your video staff is overwhelmed?” Colbert mocked. “Like Paul Revere’s famous cry: Error 404 horse not found. Come on!” 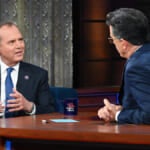 Colbert then went a bit further, while simultaneously touting the accomplishments of his own video staff for the show.

“Come on Lofgren! You’re postponing because your poor widdle video team is tie-tie?” Colbert sneered. “I got a video team here at the ‘Late Show’ and I ride ‘em like a borrowed mule and I put them away wet, OK? They put together clips five nights a week under inhuman conditions — by which I mean watching Fox News. These folks have seen — it’s awful! These folks that seem Tucker Carlson’s face more than their own children, and they can handle anything I throw at them!”

To further prove his point, Colbert then threw a series of rapid-fire requests at his video crew, and they obliged each one.

You can watch Colbert’s full monologue in the video above. 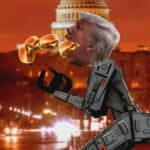