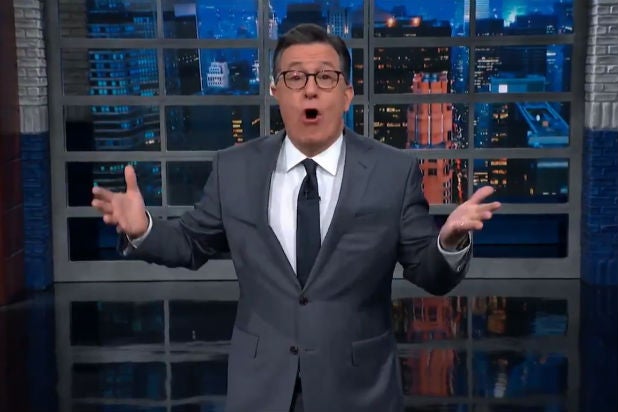 Wednesday’s episode of “The Late Show” was clearly filmed during the daytime, well before the absolutely crazy run of coronavirus news that hit the country starting around 9:00 p.m. ET (more on that momentarily).

But that doesn’t mean there wasn’t anything topical, by which we mean coronavirus-related, for Stephen Colbert to talk about. In his monologue, he talked about the press conference Mike Pence held on Tuesday, in which one of the senior scientists heading up the government’s response to the plague pretty much said America needs to get ready for things to really suck. “As a nation, we can’t be doing the kind of things we were doing a few months ago,” Dr. Anthony Fauci said in a clip Colbert played.

Then he brought up statements made by “task force leader, and man who has quarantined his mind from knowledge,” Mike Pence, who said, “All of our major health insurance companies have now joined with Medicare and Medicaid and agreed to waive all copays, cover the cost of all treatment for those who contract the coronavirus.”

Colbert used that comment to make a fun joke: “What a cool idea. It’s like Medicare. But, um, for all.”

Funny stuff, but had Colbert waited just a few hours later to tape Wednesday’s show, until after Donald Trump’s wild White House address on coronavirus, he might have updated the joke because as it turns out, Pence’s statement is false. See, after Trump announced a ban on all travel from Europe (except, for some reason, the U.K.), he repeated the same claim, that both treatment and testing will be fully covered.

Also Read: Trump Bars All Travel From Europe - Except the UK - in Response to Coronavirus

Unfortunately, almost immediately after the White House address, the biggest health care lobby in the country hastily told journalists that only testing, not treatment, will be covered, something the White House later confirmed. So uh, here’s hoping everyone who gets sick is a millionaire.

TONIGHT: The Coronavirus has got us all wishing it was a few months ago. #LSSC pic.twitter.com/8W4lmBUpzd