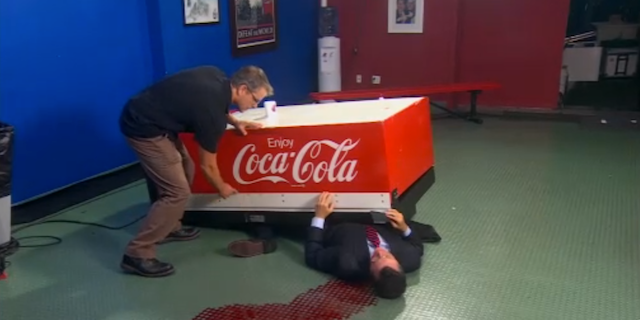 Fresh from a segment about celebrities who have saved lives of normal people, Stephen Colbert had a totally random star encounter of his own: Matt Damon!

Yes, Damon — who made a brief appearance on Colbert earlier this week dancing to "Get Lucky" in the "Matt Damon Booth," happened to be backstage when a vending machine fell on top of Colbert, trapping him underneath.

"This is so great. I've always wanted to be saved by a big star," Colbert said, his organs rapidly failing. But then he remembered that Damon's latest film was a fracking movie called "Promised Land" and started to wonder if he was a big enough movie star to save him after all. Damon pointed out that he was also in "Behind the Candelabra," which received 15 Emmy nominations — "including one for me!"

But that wasn't enough for Colbert, who pointed out that it was on television.

"It's not TV. It's HBO," Damon said, before finally taking a seat on the vending machine to talk about "Elysium."

Bleeding heavily, Colbert showed a clip from the film.

Ultimately, Damon was unable to save Colbert, as he was called away to save Jimmy Kimmel from a mayonnaise jar.