The night after the Academy Awards, Stephen Colbert lit into the Oscar show on "The Colbert Report," calling it "Hollywood’s biggest stroke-fest" and "the one day of the year you have to give a crap about what a sound editor does."

Colbert, whose TV persona is to say the least Xenophobic, went on to heap particular vitriol on the Foreign-Language Film category, since he’s American and wants his films to be in English.

The segment was available on Comedy Central’s website after the show was broadcast … but  now, suddenly, it’s no longer there.  And if you click on the video that purports to be the "full episode," you’ll get Colbert’s interview with Tom Hanks, but nothing else. 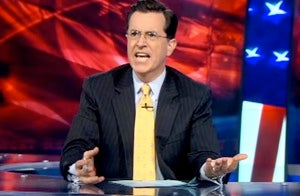 It might look sinister, summoning up visions of angry sound editors marching on Comedy Central … or director Pedro Almodovar, his hair even more askew than usual, launching into a spirited and partially comprehensible anti-Colbert tirade.

And then there’s this: with the show missing the anti-Oscar segment, what’s left is an interview with an actor who also happens to be a member of the Academy’s board of governors, and a vice president of the organization.

In fact, it’s business as usual for AMPAS — which doesn’t care that Colbert was trashing its big night, but has strict rules about using film clips from the Oscar show.

For the first day after the Academy Awards telecast, other media outlets are allowed to show three minutes of footage from the show.  For the second through the seventh day, they’re permitted to show one minute.  And after seven days, no Oscar footage can be used without special permission from the Academy.

A spokesperson for Comedy Central says the segment used a small amount of footage from the Oscar show, which means its afterlife was always limited.

So Colbert was free to do all the trash-talking he wanted, knowing that it’ll all disappear into the ether within a few days.