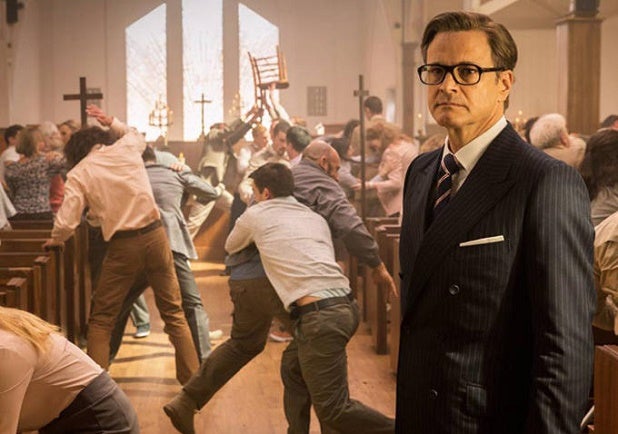 “This is not that kind of movie,” the characters in the spy spoof “Kingsman: The Secret Service” repeatedly remind us.

There is no denying, however, that it’s a breakout hit. The comic book adaptation starring Colin Firth and directed by Matthew Vaughn (“Kick-Ass”) is heading for a strong $41 million and second place at the box office over the Presidents Day weekend.

Those aren’t 007-sized grosses, and they’re a little less than half of what the leader “Fifty Shades of Grey” brought in. But it’s about $10 million more than analysts and Twentieth Century Fox had projected for the four-day domestic debut of “Kingsman,” an R-rated and raucous action adventure co-starring Samuel L. Jackson, Michael Caine and newcomer Taron Egerton.

The big debut also provides more momentum for the already impressive foreign run of the $80 million “Kingsman,” which has a British director, star and setting. After adding $23 million this weekend, its overseas total is up to nearly $44 million, with five of the top ten markets to go.

“It starts with the film, which was the brainchild of Matthew (Vaughn) and Mark Miller, who wrote the comic that it’s based on,” Fox distribution president Chris Aronson told TheWrap. “As soon as we saw it, we knew we had something special.”

“Kingsman” hits a sweet spot that only a few spoofs do, like this summer’s superhero send-up “Guardians of the Galaxy” did. While delivering plenty of laughs kidding about spy movies, “Kingsman” seems a pretty good spy movie itself.

“Simply put, it just looked super cool,” said Rentrak senior analyst Paul Dergarabedian. “Director Matthew Vaughn, who is one of the most visually adept directors working today, created action set pieces in the film that are off the chain. A terrific cast of older well-known actors mixed with a great ensemble of young talent made this an irresistible combination.”

“It’s particularly notable because it is not a sequel or a widely known brand,” said Dergarabedian, who also noted Fox’s counter-play with “Kingsman,” which was originally scheduled for release last October but shifted to take on the very female-skewing “Fifty Shades.”

“Once ‘Fifty Shades’  was on Valentines, we kept watching the response and the good word kept filtering out, so we figured putting it there would keep everybody else away,” said Aronson.

The plan worked, and “Kingsman” drew crowds that were 57 percent male, and 60 percent over 25. Aronson got a kick from the gender breakdown.

“That’s a pretty strong number for women,” he said, “given that other film out there.”

The critics dug “Kingsman,” and have it at 70 percent on Rotten Tomatoes, and audiences gave it a “B+” CinemaScore. They liked the slickly choreographed fight scenes, packed with stylized comic book violence.

Having Firth front-and-center for all the fisticuffs is amusing in itself. The actor is better known for prestige fare like “Tinker Tailor Soldier Spy” and “The King’s Speech,” the 2012 Best Picture Oscar winner in which he had to confront a speech impediment.

It’s hard to imagine that was as much fun as taking on Valentine, the very Bond villain-esque tech mogul played by Jackson, who wants to wipe out the world but hates blood.

All the positive word from critics and fans should keep “Kingsman” from exiting theaters anytime soon.

After all, it’s not that kind of movie.