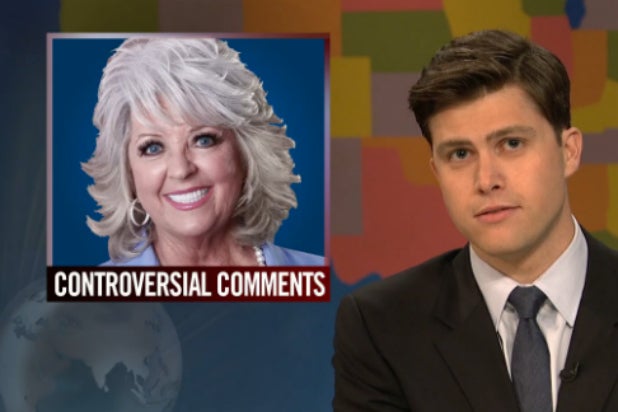 Someone actually approves of the new “Popular Film” category at next year’s Oscars: “Saturday Night Live’s” Colin Jost, one of the upcoming Emmy Awards hosts.

Jost, who will host next month’s Emmy awards with his “Weekend Update” co-anchor Michael Che, received some push-back Tuesday after telling The Los Angeles Times about his desire to see “good, fun” things win awards rather than only “good, artsy” things.

“Remember when movies like ‘Gladiator’ won best picture? Why can’t good, fun things win and not just good artsy things? They’re both good and the fun ones are sometimes a lot harder to make,” Jost said in an interview with the paper about hosting the Emmys.

Jost’s comments apparently struck a nerve on social media, with many coming out against his assertion that only “fun” movies should win, and others saying he’s conflating issues exclusive to the Oscars vs all of award shows.

“Yes, the real problem with the emmys is that they don’t reward popular shows enough,” write Alison Herman, a staff writer for pop culture site, The Ringer. The last two Emmy winners for “Outstanding Drama Series” — “The Handmaid’s Tale” and “Game of Thrones” would both be considered popular, though we’d imagine few would describe “The Handmaid’s Tale” as “fun.”

yes, the real problem with the emmys is that they don't reward popular shows enough https://t.co/aweOVSw3S8 pic.twitter.com/FOTrN5QkCr

Others accused Jost of saying that only a certain type of film that fits his own worldview should be honored. Crooked Media cohost Louis Virtel‏ added: “And this is why we have bulls— like the “Popular Film Oscar”: to appease people like Colin Jost who don’t care about recognition of great films because they’re not masc and white enough.”

And this is why we have bullshit like the "Popular Film Oscar": to appease people like Colin Jost who don't care about recognition of great films because they're not masc and white enough. pic.twitter.com/8xTLkq62C9

Jost did get a few defenders, however, which basically wondered why saying “fun” movies should win more awards is controversial. One added that Jost should’ve faced more backlash for making a joke that seemed to be in poor taste about the #MeToo movement.

I think Colin Jost has a point re: the Oscars & Gladiator and good popular movies being just as difficult to make as good art movies *ducks*

You can read the full interview with Jost and Che in The LA Times here, and more reaction below:

Hey Colin Jost, you don't think good artsy movies can also be fun? You don't think The Shape of Water, a fantasy movie about a woman who falls in love with a fishman, is fun?

so it sounds like what i'm hearing is that colin jost and scarlett johansson totally deserve each other?

If you dip a pair of Sperrys in IPA and whisper Talledega Nights three times, Colin Jost appears with a lobster roll to tell you about the condoms he took to Summer camp.