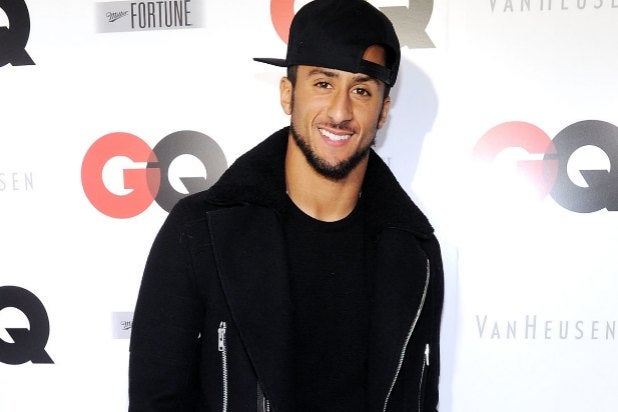 Colin Kaepernick’s probably not going to get as many Christmas cards from football fans this year.

According to ESPN, a new E-Poll Marketing Research survey asked a cross-section of 1,100 Americans to categorize their feelings for more than 350 NFL players. As it turns out, Kaepernick was “disliked a lot” by 29 percent of those polled, more than anyone else listed.

That was a full 7 percent better (or, worse, really) than the No. 2 guy, Tampa Bay Buccaneers quarterback Jameis Winston (22 percent), who entered the league with some character questions, to say the least. Since then, however, he’s not only played well, he’s behaved well. In third place was Miami Dolphins defensive end Ndamukong Suh (21 percent), a noted dirty — yet dominant — player.

Rounding of the Top 5 were New England Patriots quarterback Tom Brady (13 percent) and Pittsburgh Steelers quarterback Ben Roethlisberger (10 percent). Brady is disliked because of Deflategate, his overall winning ways, and probably his model looks (plus his actual model wife); Roethlisberger was accused of rape in 2008, though no charges were filed. He settled a related lawsuit in 2012.

In August 2014, the last time this poll was taken, Kaepernick was only “disliked a lot” by 6 percent of those asked. That’s quite a healthy change.

Additionally, Kaepernick was “disliked a lot” by 36 percent of those polled who identified themselves as NFL fans. That’s up from 10 percent the last time, another big swing.

For whites, it’s a much different story.

In 2014, just 7 percent of Caucasians responded that they disliked Kaepernick “a lot.” Last week, that number had jumped to 37 percent.

For those lucky ones living under rocks, the great Kaepernick divide stems from the San Francisco 49ers backup quarterback’s decision to kneel during the national anthem when played before his games. Kaepernick is sitting out the “Star-Spangled Banner” to protest racial injustice in America.

Since the former Nevada athlete publicly boycotted the song, others have joined in, and across multiple sports. Just yesterday, members of the WNBA’s Indiana Fever linked arms and kneeled for the song before their playoff game.