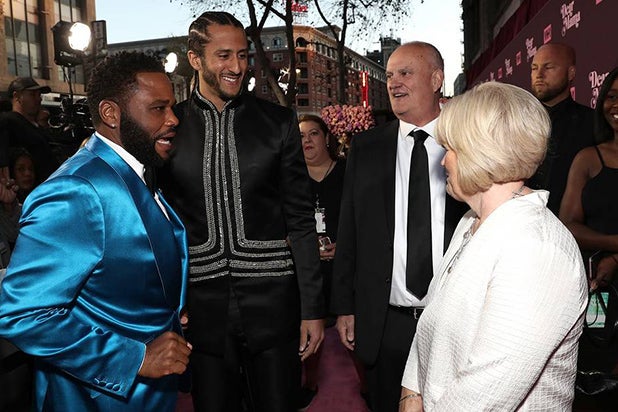 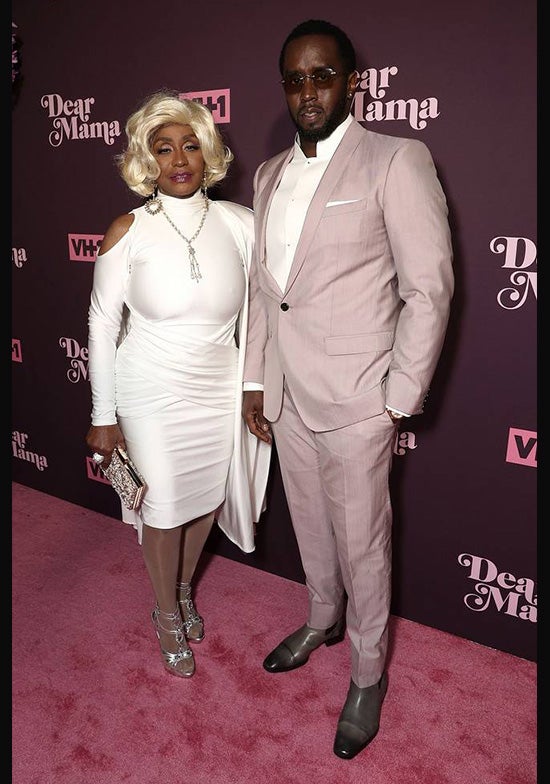 VH1
Before introducing Patti LaBelle to perform “You Are My Friend," Diddy took to the podium to praise his mother, Janice. The special airs on VH1 on May 7 at 9 p.m. Also Read: Weinstein Co. Seeks to Depose Group Supporting Harvey Weinstein Accusers 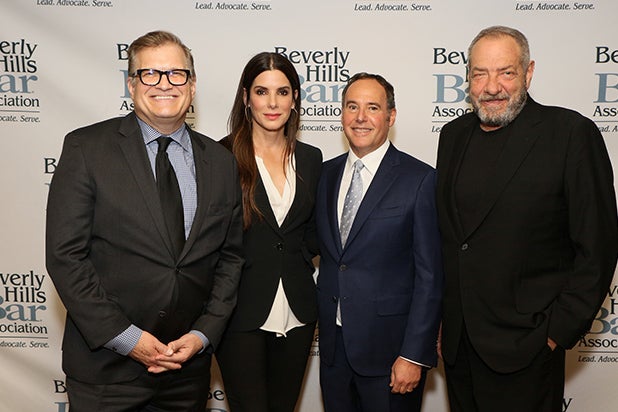 BHBA
Drew Carey, Sandra Bullock and Dick Wolf (right) showed that they are in good hands with Cliff Gilbert-Lurie, the Ziffren Brittenham partner who was honored as the Beverly Hills Bar Association entertainment lawyer of the year at the Montage Beverly Hills. 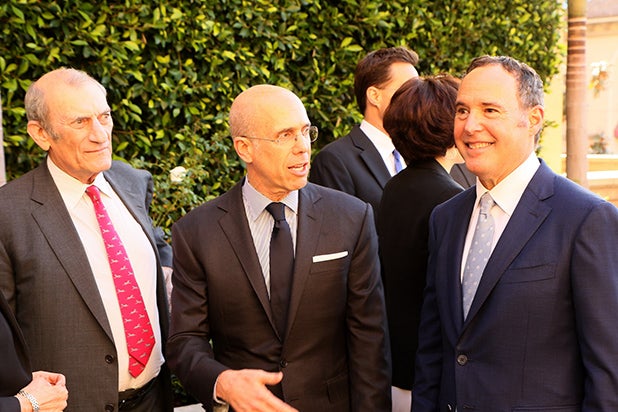 BHBA
Ken Ziffren, Jeffrey Katzenberg and the honoree chatted at the annual gathering of power lawyers. "The dinner creates a moment to tell my clients, partners, friends in the entertainment business, and family how much they all mean to me, and to thank them for their trust and confidence in me over the years," Gilbert-Lurie said. 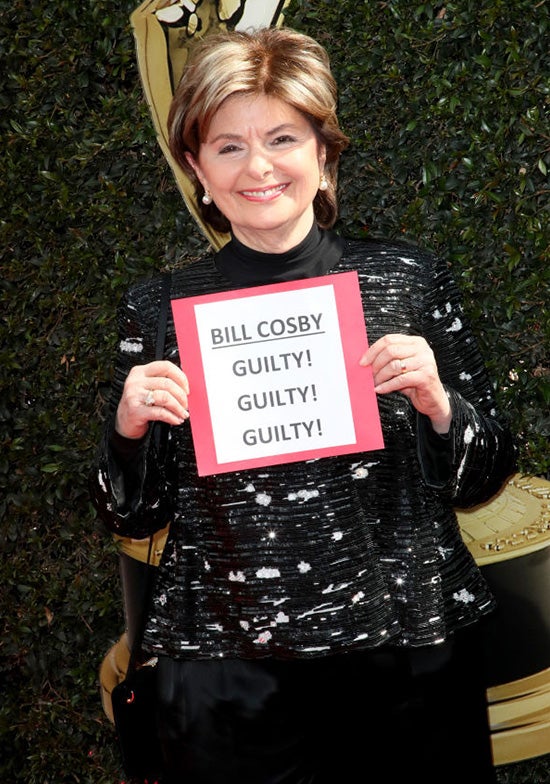 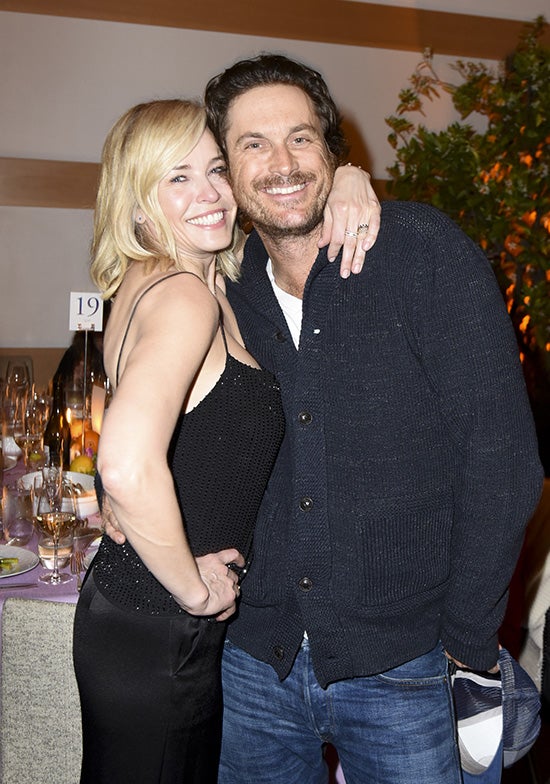 Getty Images
Chelsea Handler buddied up with Oliver Hudson at the Communities in Schools L.A. event at the Skirball Center, an annual high-wattage fundraiser backed by CAA that benefits the national high school dropout prevention program. 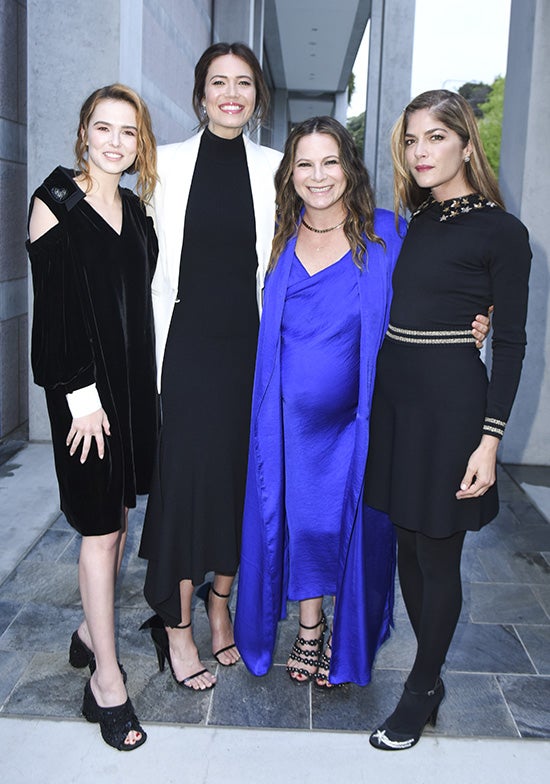 Vivien Killea/Getty Images
THE A LIST founder Ashlee Margolis (second from right) was one of the key honorees. Pals Zoey Deutch, Mandy Moore and Selma Blair joined Margolis, one of the most well-connected and original fashion "influencers" before that became a dirty word in the social media age. 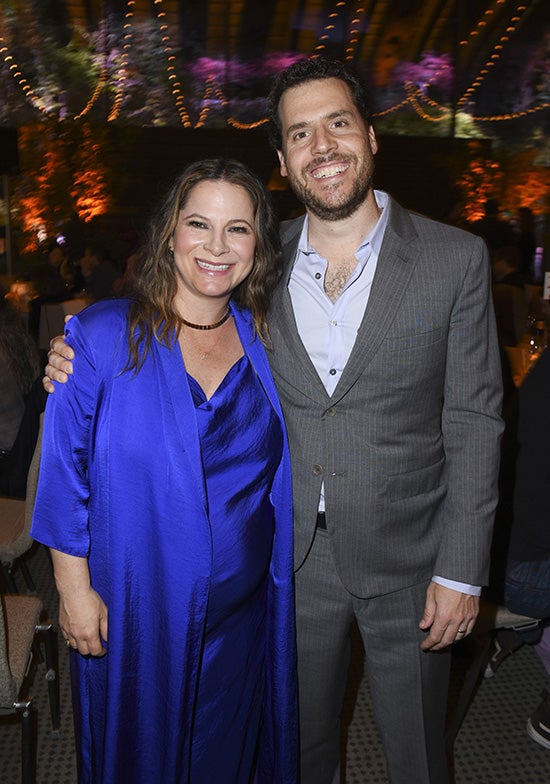 Getty Images
Margolis with husband Dan Fishman. THE A LIST is known for providing key internships for at-risk high school students that help course correct teens towards careers and professional life. Also Read: What I Learned at TheWrap’s BE Conference on Mentorship 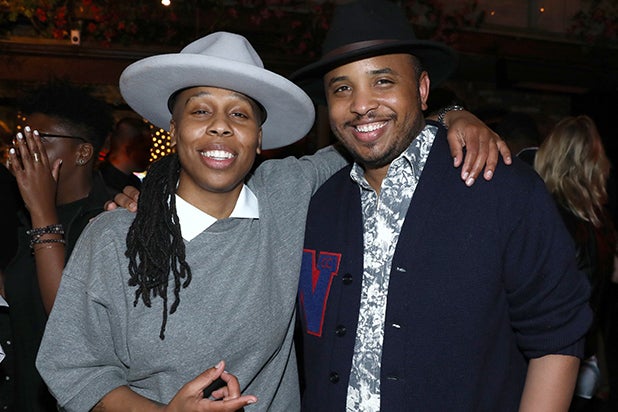 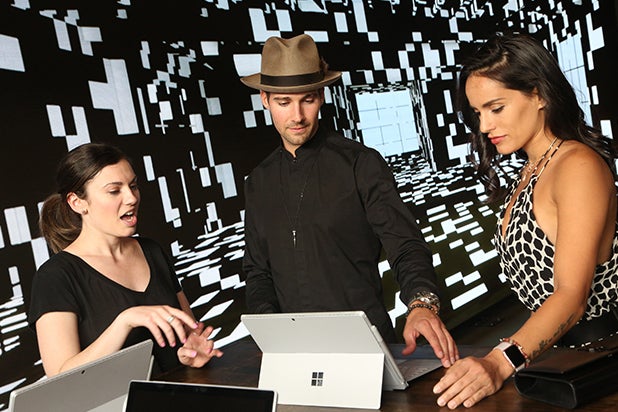 Casey Rodgers /Invision for Microsoft/AP Images
With a significantly higher profile after a noisy run on "Celebrity Big Brother" this winter, James Maslow is on the scene. Here with Gabriela Lopez (right), he made the cut for the Surface Young Hollywood event at the Microsoft Lounge. In addition to the productivity apps, Smartly, Microsoft showed next-gen Hollywood that they can play "Minecraft" on a surface. Also Read: Microsoft Acquires ‘Minecraft’ for $2.5 Billion 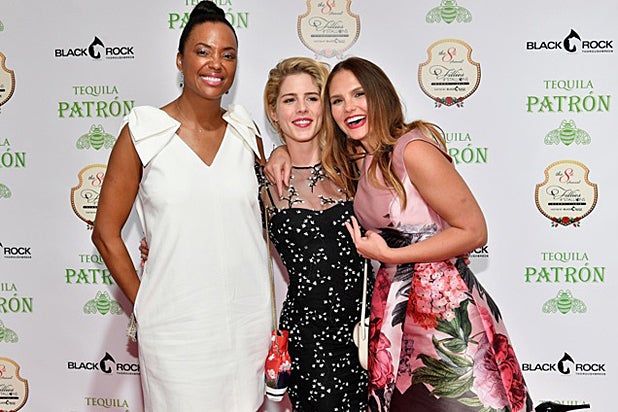 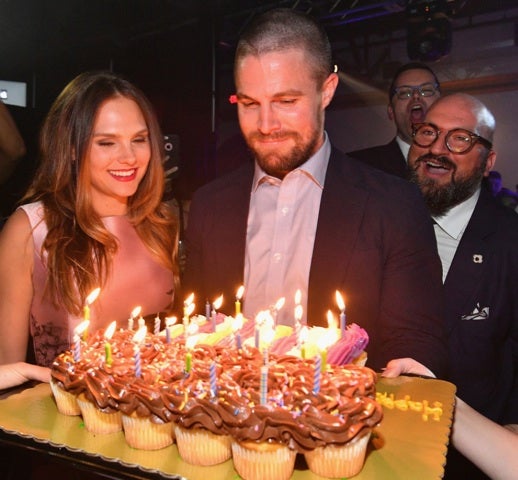 Dia Dipasupil / Getty Images
The Fillies & Stallions Party was also a great excuse for "Arrow" actor Stephen Amell to celebrate his birthday a few days early (he turns 36 on May 8), so a platter of cupcakes was brought out. 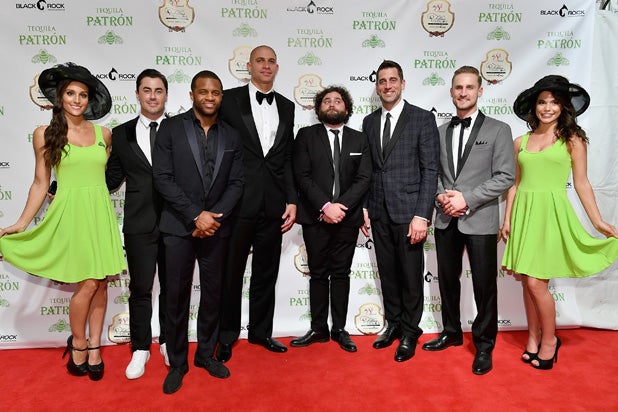 Getty
Green Bay Packers QB Aaron Rodgers was joined by teammate Randall Cobb and an entourage of friends at the Fillies & Stallions party before they hit the track on Saturday to watch Justified win the 144th Kentucky Derby in the mud. 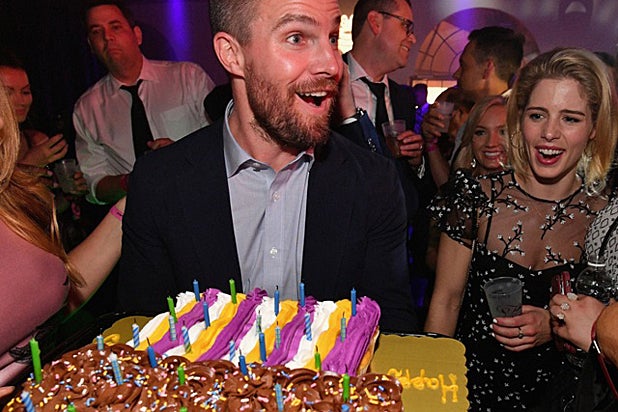 Dia Dipasupil / Getty Images
More cake??? Amell gets a sweet surprise for his annual trip to the Kentucky Derby courtesy of Fillies & Stallions. 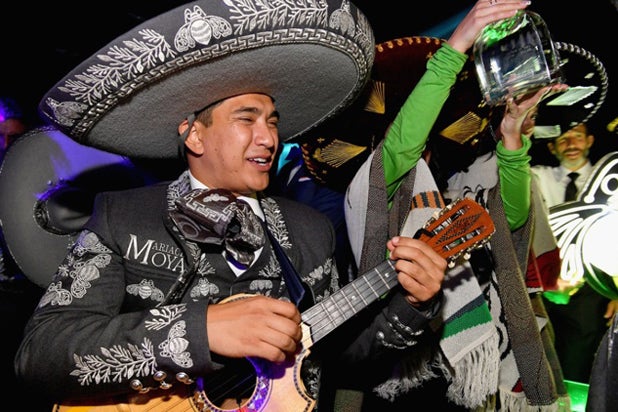 Dia Dipasupil / Getty Images
With the following day being both Cinco de Mayo and the 144th Kentucky Derby, a Mariachi band performed during the party and celebrity guests such as  Aaron Rodgers, JP DeJoria, Warren Moon and Randall Cobb were gifted engraved Patron bottles. 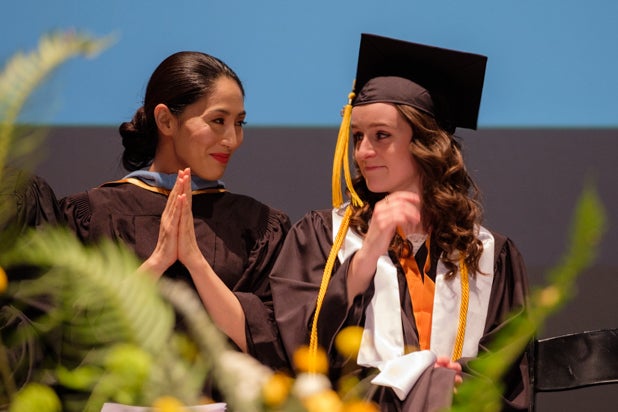 Chandler Kravitz
International actor, activist and stunt performer Ikumi Yoshimatsu (the current season of "Westworld") addressed the first ever graduating class of the Studio School on Saturday, May 5. Formerly known as the Relativity School, the accredited BA/BFA school is the only school of its type located inside an actual studio.  Here, Yoshimatsu chats with valedictorian Caitlyn Faucher. Hey Hollywood, look out for her resume in your inbox. 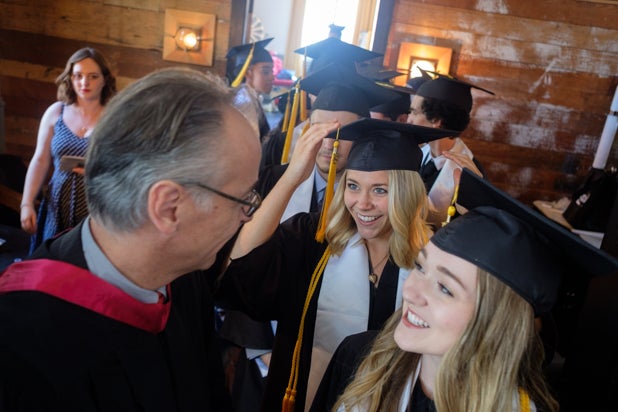 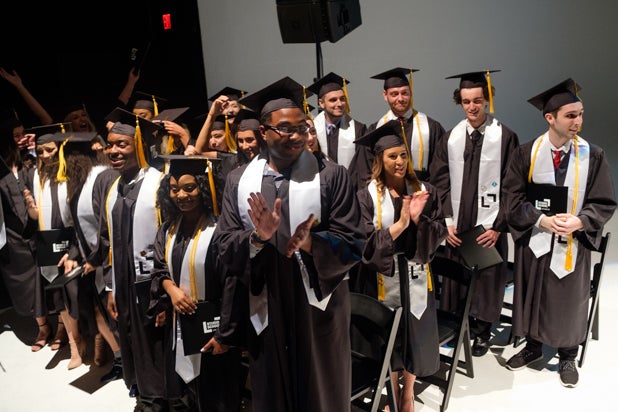 Chandler Kravitz
Over 200 friends and family came out to Mack Sennett studios on Cinco de Mayo to toast the inaugural graduates. 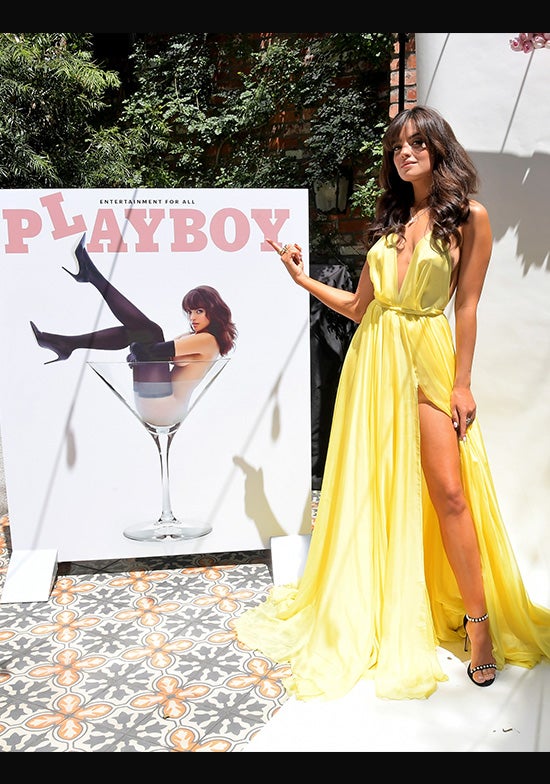 Charley Gallay/Getty Images
For more from inside the Hollywood Party Circuit, like the recent Playboy Playmate of the Year brunch, click here: Also Read: Party Report: Inside Playboy’s Playmate of the Year Brunch with ‘Savage Blood’ Winner (Photos)
x
Looks like you're enjoying reading