Comcast has agreed to buy a majority stake in NBC Universal for $13.75 billion, instantly creating a new kind of Hollywood giant by combining the nation’s largest cable distribution network with a preeminent entertainment company, both companies announced early Thursday.

NBC Universal was valued at $30 billion in the deal. 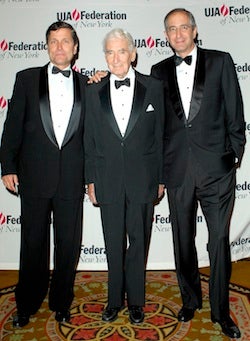 Comcast agreed to pay GE $6.5 billion in cash and contribute businesses valued at $7.25 billion, including E!, Versus and the Golf Channel, its 10 regional sports networks and certain digital media properties.Other key points of the deal:

* NBCU CEO Jeff Zucker will be CEO of the new entity.

After a quarter-century of uneven stewardship, General Electric unhooks a 51 percent stake of its troubled entertainment division to the nation’s largest cable provider for the amount in cash and stock. GE will retain 49 percent. Vivendi has sold its 20 percent stake in NBCU as well.

In a subsequent conference call with investors, Roberts said Comcast is "full of ideas" about what direction it will go with NBC, but that it will have plenty of time — given the regulatory hurdles the proposed merger needs to clear before it finally closes — to figure that out.

The deal will require approval by federal regulators, a process that is expected to take up to a year.

The acquisition is the largest to roil the unstable media landscape in several years. It instantly gives dominant status to Comcast, which suddenly finds itself with a broadcast network, a major but ailing studio and a healthy stable of profitable cable channels.

Comcast stock was up more than 6 percent. GE, at $16.27 per share, was up about 1 percent.The new array of united cable channels may be particularly compelling. One umbrella now will encompass all the MSNBC and CNBC channels; the Comcast-owned E! Entertainment Television and Style; and the NBCU-owned Bravo, USA Network and Syfy Channel.

TheWrap first broke the news of negotiations to purchase the division on Sept. 30.

For Comcast, the deal was a long-awaited opportunity to expand into the content space. The cable giant had previously tried, unsuccessfully, to acquire the Walt Disney Co. in 2004. 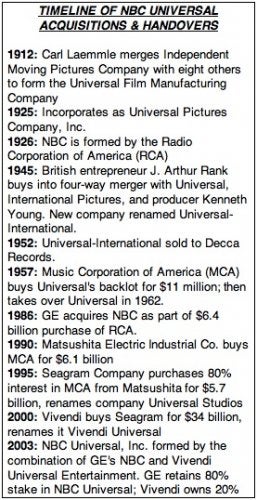 “This deal is a perfect fit for Comcast and will allow us to become a leader in the development and distribution of multiplatform ‘anytime, anywhere’ media that American consumers are demanding," said Comcast Chairman and Chief Executive Officer Brian Roberts in a prepared statement.

He added: "We are honored that under this agreement Comcast would take over the stewardship of this important collection of assets and are absolutely committed to investing in NBCU and ensuring that it is a vibrant, financially strong company able to thrive in a rapidly evolving marketplace by delivering innovative programming."

For GE, the deal was an opportunity to step away from a challenging business that is not part of its core mission, while still retaining a stake.

GE chairman-CEO Jeff Immelt suggested as much in his official statement: "This transaction will generate approximately $8 billion of cash at closing with an expected small after-tax gain," he said. "We have many opportunities to invest in our high-technology infrastructure businesses at attractive returns."

Financially, NBCU’s main value to Comcast comes in its cable channels — Bravo, USA Network and Syfy — which according to knowledgeable executives contribute more than 50 percent of the company’s profits. The libraries of Universal and NBC, with their rich histories of blockbuster movies and hit shows, are valuable — but are declining due to the disappearing DVD market.

For film studio and theme park division Universal, which has had one of its worst years in recent memory, it may be business as usual; this is the fifth time Universal has changed owners in nearly two decades (see chart).

For NBC, the fourth-place broadcast TV network, it is unclear what changes may be in the offing. Entertainment division co-president Ben Silverman already exited earlier this year, and the former head of cable, Jeff Gaspin, was put in charge of moving the network out of its doldrums. 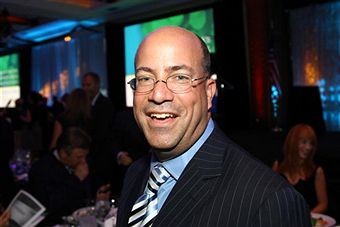 Other suitors had quietly circled the much-acquired NBC Universal, includng Time Warner, which is currently looking closely at buying a smaller and even more troubled studio, MGM.

The two companies also announced these key elements of the deal:

·         NBCU will borrow approximately $9.1 billion from third-party lenders and distribute the cash to GE. 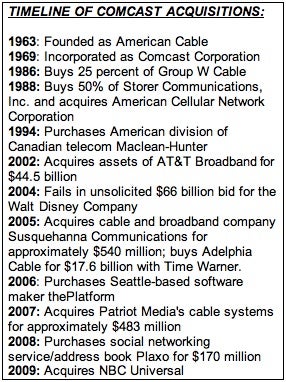 ·         GE expects to realize $9.8 billion pre-tax in cash before debt reduction and transaction fees and after buyout of the Vivendi stake. GE expects to realize approximately $8 billion in cash after paying down the existing NBCU debt and transaction fees.
·         GE will be entitled to elect to cause the joint venture to redeem one-half of its interest at year 3 ½ and its remaining interest at year 7. The joint venture’s obligations to complete those purchases will be subject to the venture’s leverage ratio not exceeding 2.75X EBITDA and the venture continuing to hold investment-grade ratings. Comcast also has certain rights to purchase GE’s interest in the venture at specified times. All such transactions would be done at a 20% premium to public market value with 50% sharing of upside above the closing valuation.
·         To the extent the joint venture is not required to meet GE’s redemption requests, Comcast will provide a backstop up to a maximum of $2.875 billion for the first redemption and a total backstop of $5.750 billion.

Deal Nears: NBC Universal Board Set, With Comcast in Majority

Comcast Update: Due Diligence at 30 Rock With NBCU