Shares of Comcast stock are currently down about 7.5 percent, one hour into Monday’s trading day. The decline is Wall Street’s reaction to the NBCUniversal parent company winning the bidding war against Fox/Disney for U.K. media giant Sky.

Below is a look at Comcast’s tough Monday morning — from a valuation standpoint, at least. We chose a five-day snapshot to best emphasize the sudden decline. 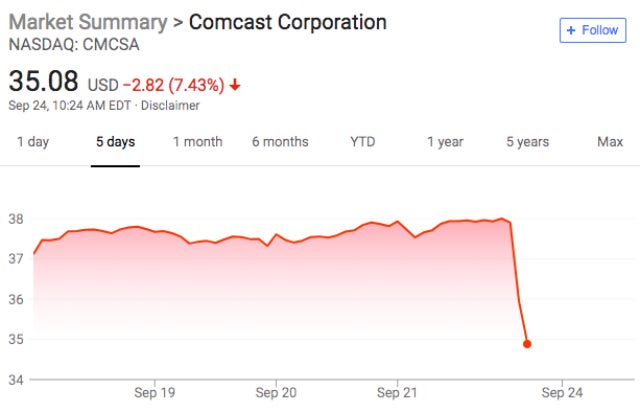 Perhaps investors thought the $39 billion Comcast paid for Sky was a bit much.

Conversely, the Street is rewarding Disney for not having to foot the bill should Fox have won across the pond. 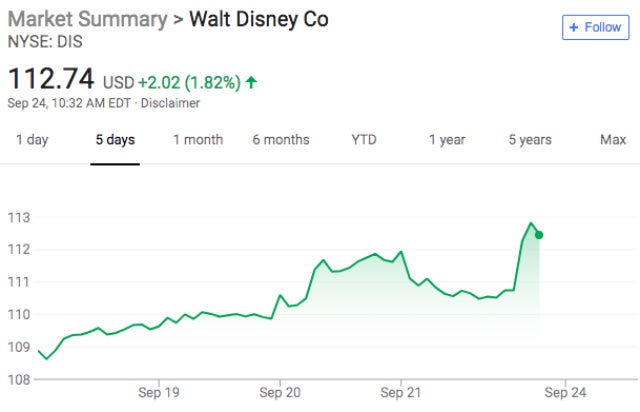 The fate of Sky was decided during a three-round auction held by the U.K. Takeover Panel, a rarely-used tactic in handling mergers and acquisitions in the U.K. Comcast’s triumph came after the company offered £17.28 (roughly $22.59) per share for the company in the final round, handily outbidding Fox’s offer of £15.67 (roughly $20.49).

Sky’s businesses could grow Comcast’s international revenue from 9 percent of its overall revenue to 25 percent. Sky counts nearly 23 million customers in key parts of Europe, including Germany, Italy and Austria, along with the U.K. and Ireland.

The overseas giant should fit in nicely with Comcast’s other assets, namely NBCUniversal, with its mix of entertainment, sports and news content. In February, Sky extended its rights deal with the English Premier League through 2022, among the world’s most popular (and thus, valuable) sports leagues. That would work well with Comcast, which holds the U.S. TV rights for the British soccer league via NBCUniversal, also through 2022.