The deal between Comcast and NBC Universal is moving toward a likely official conclusion as media honchos gathered this week at 30 Rockefeller Plaza to kick tires, scrutinize balance sheets and perform due diligence.

Meanwhile, bankers for Comcast have been approaching major financial institutions to find partners to finance the deal, according to a knowledgeable person.

Top NBC-Universal executives met with the senior Comcast brass on Wednesday, including 89-year-old founder Ralph Roberts; his son, the Chairman and CEO Brian Roberts; and COO Steve Burke, according to knowledgeable executives. 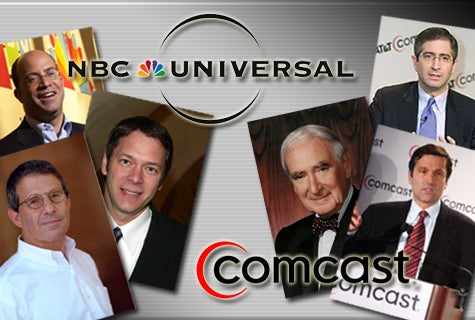 NBC television chairman Jeff Gaspin (read his exclusive interview with Joe Adalian) and his team made a similar presentation.

It’s all part of the due diligence in bringing the two sides closer to a sealed deal.

Meanwhile, NBC Universal’s current owner, General Electric, is doing its own due diligence Thursday on Comcast, according to the same executives.

Since TheWrap broke the story of the negotiations between Comcast and NBC Universal three weeks ago , the two sides have “agreed to agree,” as we reported a week ago.

A finance expert who declined to be identified said that Comcast bankers have been meeting with potential financial partners for funding debt that would be incurred in the proposed deal. Comcast already carries debt of about $33 billion. Likely partners for any new debt would be JP Morgan, Bank of America or Union Bank.

Meanwhile, the understanding with Comcast seems to be that Jeff Zucker, president and CEO of NBC Universal, will stay in place for the moment, should the deal be executed. Roberts has told Zucker as much, according to one executive.

“Zucker is acting like he’s staying,” said another executive who has been present in and around the meetings this week. Zucker’s compensation, much of which is represented in undervalued GE stock, is a subject of debate. He has the support of GE CEO Jeff Immelt, who will retain 49% stake in the company.

It’s unclear where that would leave Peter Liguori, the former Fox television chairman who – along with former News Corp number two Peter Chernin – has been advising Comcast on the purchase. The presumption has been that Liguori – a widely respected TV executive – would stay on in a senior position if the purchase were executed.

Meanwhile, Vivendi sits tight and waits to see how this all shakes out in the coming weeks. Its window for deciding on whether to exercise the put for its 20 percent stake closes on Dec. 10. Count on a decision by Dec. 9, if the Comcast deal hasn’t closed by then.

What I’m hearing, still, is that the final deal remains weeks, rather than days, away.

Remains to be determined: the price. If the ballpark is $30 to $35 billion, the precise selling price remains unresolved, I am told.