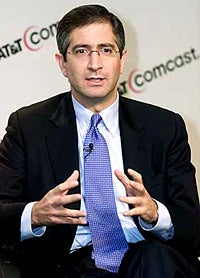 Some more notes from Thursday’s Comcast/NBCU media conference call (which, by the way, was marred by some technical difficulties that delayed the festivities for more than a few minutes).

The call was short on concrete ideas, long on vague synergies, with executives from both parties stressing they will have a lot of time to figure out a specific plan while the Department of Justice and FTC scrutinize the proposed deal valued at more than $37 billion.

* Brian Roberts, Comcast chief executive, on the synergies they can exploit: “There’s more of an upside than downside … we’re pretty excited about the whole portfolio.” In particular, the cable channels, which are “driving the growth” at NBCU.

* On Versus/NBC becoming an ESPN rival, Roberts: “The idea we are going to take on ESPN is overly simplistic.”

* That said, “We have lots of time to think about these ideas.”

* On the future of a free Hulu and NBC video content on the Web, Roberts said “those decisions are NBC’s for the next year.” Zucker added: “A product roadmap is not something we want to publicly talk about.”

* Roberts: “We feel on-demand is a big part of Hollywood’s future.”

* On the potential for post-merger layoffs, Roberts said “there is very little overlap among the companies’ estimated 130,000 employees. “Ninety-nine-point-nine percent” have job functions that don’t overlap.

* “There will certainly not be a large number of headcount reduction.”