Comedy Central will start running "It’s Always Sunny in Philadelphia" with back-to-back episodes from 9-11 p.m. on Monday, May 31. 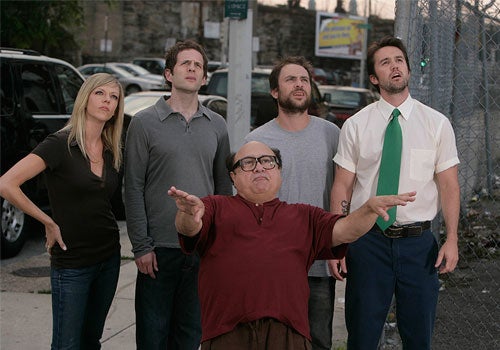 Comedy Central acquired basic-cable rights to the comedy in a multiyear deal with 20th Century Fox that gives Comedy Central a special, limited summer 2010 run. After that summer window, "Sunny" will settle into its long-term, multiyear run in January 2011.

"Sunny" has aired for five seasons on FX. The half-hour comedy stars Charlie Day, Rob McElhenney, Glenn Howerton, Kaitlin Olson and Danny DeVito as the owners of Paddy’s Irish Pub in Philadelphia who will do just about anything, no matter how reprehensible, in an attempt to better their own lives.

First-run seasons of "Sunny" will continue to air on FX. In addition to the five seasons already produced, Comedy Central also acquired the rights to seasons six and seven, which will premiere this fall and in 2011, respectively.

Also, Comedy Central announced the TV premiere of Dan Cummins’ comedy special: "Crazy With a Capital F" on Saturday, May 29, at 11 p.m.

Live from Spokane, Washington, Cummins performs his cynical observational humor before a sold-out crowd, exploring such topics as the joys of drunk-gifting yourself, the absurdity of iPod vending machines and the perils of the "Tooth Gremlin."