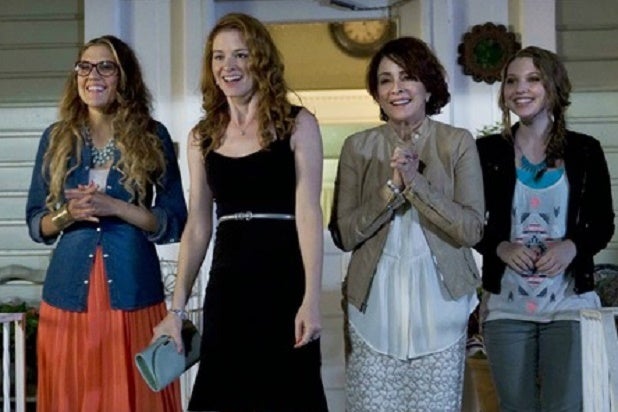 The Christian-targeting comedy “Moms’ Night Out” didn’t get much of a boost from Mother’s Day weekend, and opened to an underwhelming $4.2 million.

That’s not terrible; it was in just 1,044 theaters — way below what “Neighbors” and “Amazing Spider-Man 2” played in — and posted a decent $4,023 per-screen average. Made for under $5 million, the PG-rated “Moms’ Night Out” faced some tough competition on the comedy front from the R-rated frat vs. family romp and Fox’s PG-13 “The Other Woman.” But its opening is considerably lower than that of several other faith-based films this year.

The “mom-com” about four women looking for a night on the town targeted the typically under-served Christian and female comedy crowds, but didn’t make major waves with either demographic group, despite a grassroots campaign run by Affirm Films and Provident Films.

The critics weren’t keen — it’s at just 17 percent positive on Rotten Tomatoes — but first-night audiences gave it a “B+,” so it could pick up some steam over the coming weeks. It will have a tough time making up ground on earlier Christian-angled films, however.

It comes on the heels of Sony TriStar’s $12 million Greg Kinnear drama “Heaven is For Real,” which opened to $22 million last month and this weekend passed $75 million domestically.

PureFlix Entertainment’s “God’s Not Dead,” made for less than $5 million, opened to $9 million in March and is up to $57 million after this weekend.

And Mark Burnett‘s “Son of God,” which opened in February and has taken in more than $67 million worldwide, was re-purposed for the big screen from the History Channel miniseries “The Bible” for less than $10 million for Fox.

Paramount’s “Noah” is easily the highest-grossing of the year’s movies with religious themes, having taken in around $100 million domestically and nearly $340 million worldwide since opening in March. But its $125 million production budget and proportionally large marketing spend mean it’s likely still under water.

Also read: ‘Hollywood Torrent': ‘Noah’ Will Cross $100 Million in the US, But Will it Turn a Profit? (Video)

“Moms’ Night Out” is directed by Andrew and Jon Erwin, who co-wrote with Andrea Gyertson Nasfell. It was produced by Kevin Downes in association with Four Boys Films and and Pure Flix. Heaton and her husband David Hunt, who co-stars in the film, executive produced.