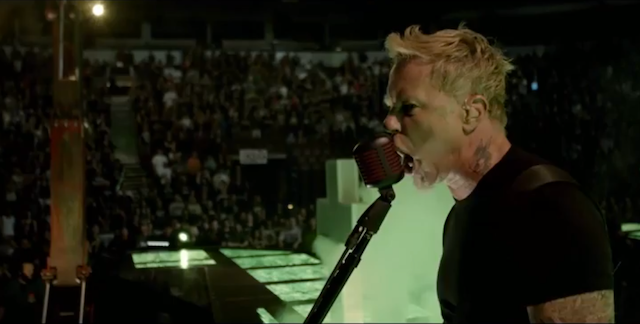 Metallica will perform during Comic-Con San Diego to help promote a new 3D movie the iconic metal band wrote and stars in, Picturehouse announced on Monday. The film, “Metallica Through the Never,” splices footage of a Metallica concert in Canada with a fictional narrative about a roadie (played by Dane DeHaan).

Picturehouse is distributing the movie — its first project since the company relaunched with Bob Berney and his wife Jeanne in charge.

The four members of the band (James Hetfield, Lars Ulrich, Kirk Hammett and Robert Trujillo), along with DeHaan, director Nimrod Antal and producer Charlotte Huggins, will appear on a panel at 6:30 p.m. July 19, debuting a trailer, poster and footage from the film for fans in attendance.

The band, making its first appearance at Comic-Con, also will play a private concert at a secret location. Those fans at the panel will learn the location and have a chance to win tickets.

Advance tickets for the movie will go on sale after the panel. The film will open on large-format IMAX screens Sept. 27 before moving to additional theaters the following week.

As the New York Times pointed out in a Monday piece on Metallica’s Comic-Con plans, music has never been a focal point of an event dedicated to other cultural industries such as film, television and comic books. While most of the zealous fans in attendance are usually on the lookout for invites to parties, pictures with celebrities and unique memorabilia, a ticket to that show could become the hottest ticket in town.