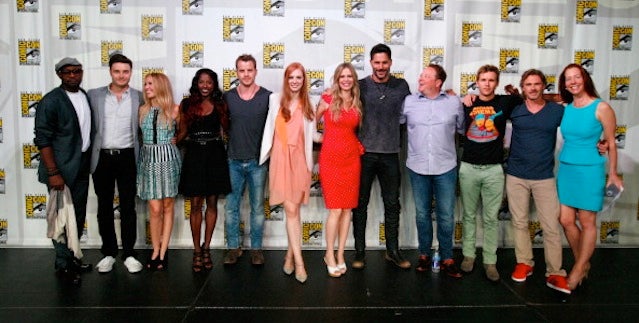 We thought it was huge when Alan Ball announced he's stepping down from the showrunner post at HBO's "True Blood." But, things got really interesting when his replacement Mark Hudis was replaced.

Brian Buckner (fourth from right, above), a writer on the series since Season 1, assumed the position mid-season on Season 6. "It's  like being in a car crash," Buckner said during the show's panel at San Diego Comic-Con. "We had to shift on the fly. I never knew how hard Alan worked. The job doesn't stop. It just keeps going. I never had more respect for Alan."

(At left, Buckner with the show's Anna Paquin at "True Blood's" premiere after-party.)

When asked whether the new post has gotten to his head, the cast responded with a resounding no.

"He's been one of our writers for a very, very long time," Sam Trammell said. "It's sort of a continuation."

His voice was already really strong in the series," Anna Paquin interjected.

We can already see that the series has taken a more intimate storytelling approach this season, and Buckner says that will continue under him.

"The show is going back to its roots," Buckner said. "It's going to be about Bon Temps. I know that we have a very large cast, but we're going to condense our storylines a bit."

He reiterated that message after a fan asked if more supernatural beings will be introduced into the series.

"I feel like this show is ultimately about the relationships between vampires and humans and about these great actors. I want to rein that in," he answered to audience applause. "think we screwed ourselves in the past and my goal is to bring our characters under the same umbrella storyline."