Sure there’s plenty to do at San Diego Comic-Con this week, but what happens if you decide you need a break from panels and looking for back issues? Plenty more, as it happens.

From TV show-branded activations to live comedy shows, even art shows, and best of all, a lot of it is open even to people who weren’t lucky enough to win the lottery and secure a badge for SDCC 2018.

Comedy lovers will be able to join Conan O’Brien at the TeamCocoHouse pop-up comedy club beginning on Wednesday with events through Saturday. Meanwhile, Purge fans can cleanse their souls at the “Purge Emporium.” And you’ll be able to watch two episodes of the upcoming season of “The Venture Bros.”

Plus, Fans of “The Good Place” can visit heaven on earth — or is it hell? — at a re-creation of NBC comedy’s first season setting in the Gaslamp district.

Check out more details and see the list of activations and events below (updated as needed). For the full schedule of panels, see our post here.

10:00 p.m. – Last Stream on the Left Live! A live broadcast of popular podcast

8:00 p.m. – AS Cosplay Competition Hosted by Henry Zebrowski  We invite cosplayers to show off their inspired creations, don their best Adult Swim themed garb and strut their stuff! Awards will be passed out and bragging rights will last a lifetime.

7:15 p.m. – Toonami Pre-Flight to with TOM and SARA – Get behind-the-scenes info from show hosts Jason DeMarco and Gill Austin, Steve Blum (voice of TOM) and Dana Swanson (voice of SARA).

8:15 p.m. – The Pillows Live In Concert – A event not to be missed! Special live concert to celebrate the new seasons of FLCL.

10:00 p.m. – Rick and Morty Fan Event – The fan favorite show is back for a special event! Admission is extremely limited so fans should register at AdultSwimPresents.com for details on how to receive event wristbands.

Description:  Alpha & The Kraken Rum return to San Diego Comic Con for their exclusive Alpha After Dark Party. Alpha members will enjoy a curated evening of music by DJ Franki Chan of IHEARTCOMIX, the opportunity to receive personalized Kraken-inspired portraits by famed graphic artists Tom Hodges and Tony Parker, and custom signature Kraken Rum cocktails! Invites are limited to Alpha members; non-members can sign up for Alpha at www.projectalpha.com. Fans will want to attend the party to see what The Kraken unleashes at SDCC this year!

Complimentary rides throughout the Gaslamp District in branded electric cars. Featured shows will include the new fall comedies THE NEIGHBORHOOD and HAPPY TOGETHER. Trailers of the series will be screened for the passengers in those cars as well. Brand ambassadors will distribute giveaways making their debut at Comic-Con, including a variety of collectable emoji squeezies for THE NEIGHBORHOOD and HAPPY TOGETHER.

Activities inspired by FX shows “Legion,” “American Horror Story,” “Mayans M.C.” and “Archer utilize Near Field Communication (NFC) technology and is open to the public. Fans may register in advance at FXSDCC.com and use NFC on-site to record each moment of their experience, which will be captured in a virtual online gallery. 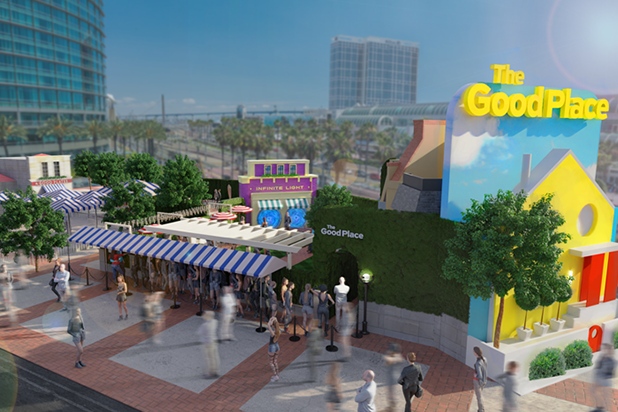 Comic-Con attendees will immerse themselves in the entertaining and philosophical world of “The Good Place,” where everyone is welcomed into the show’s inspired neighborhood tailored specifically for San Diego Comic-Con. Constructed to remind fans of the show’s hilarious and unforgettable moments, guests will become part of the scene. In addition to the main interactive experience, fans will enjoy a host of exclusive giveaways, a branded digital takeaway, and several custom opportunities to capture photos and videos with some of the most iconic elements from the series. “The Good Place” activation is produced by Oaken Anchor exclusively for NBC. Guests can pre-register online starting Wednesday, July 11 at www.thegoodplacesdcc.com. Each attendee will receive a customized profile and wristband utilizing Radio Frequency Identification (RFID) technology

From IMDB: The IMDboat, which is accessible by invitation only, will again serve as a floating video studio and a must-stop
destination for talent and industry VIPs. The boat will be docked at Fifth Avenue Landing, immediately behind the San
Diego Convention Center, and opens to invited guests on Thursday, July 19. On board, industry guests will enjoy a
private workspace and lounge, refreshments, a photo booth, trivia games and gifts provided by Atom Tickets, LEGO
Systems, Inc. and Essentia Water. From the public boardwalk, fans on the street can view the massive LED screen
located on the back of the IMDboat and watch live as Kevin Smith interviews leading celebrities. IMDb events and coverage on and around the IMDboat at Comic-Con include:

CBS will cruise the streets of in a branded Ferrari 488 to promote the return of MAGNUM P.I. Brand ambassadors will distribute red sunglasses and Hawaiian leis.

Here’s how History describes this activation: “Project Blue Book Headquarters” is a fully immersive exploration of true Project Blue Book cases, where government officials invite skeptics and believers to examine UFO-related phenomena from the era. Guests are also encouraged to share their own encounters where a professional sketch artist will help bring their personal stories of the unknown to life.

Transporting fans into the world of THE PURGE, “Purge City” is a tongue-in-cheek, one-stop shop for the perfect Purge Night, where friendly “Purge City” staff help visitors browse the aisles for items from emergency candles to masks to energy drinks–to help citizens stay safe and awake for the 12 hours of annual lawlessness.

For this fully immersive STAR TREK: DISCOVERY Mirror Universe experience, Comic-Con badges are not required for entry. The exhibit will feature a photo opportunity with Emperor Georgiou’s throne and will showcase props and costumes from the series’ Terran Empire. The gallery will also house an official “Star Trek” shop with Comic-Con exclusives.

Free “intergalactic” rides throughout San Diego’s Gaslamp District in pedicabs inspired by the design of the U.S.S. Discovery’s captain’s chair. The pedicabs will feature the chair’s distinctive stitched black seats as well as video monitors built into its armrests, which in this case will screen trailers for the highly anticipated second season of the show. As an added touch, each vehicle will display an illuminated U.S.S. Discovery delta shield on the back.

SYFY’s epic fan parties will return to the Children’s Museum for two nights on Friday and Saturday at 9PM. “You don’t have to be a celeb to get on our guest list,” said Shapiro. “If you’re a fan, we want you to come party with us – on a first-come-first-served basis, of course!”

SYFY will partner with hip, high-profile collaborators to create limited edition merchandise, each featuring an original, custom genre-themed design by a famed artist. Limited quantities will be released each Thursday through Saturday mornings at 10AM at the Children’s Museum.

A daily lineup of comics handpicked by Conan, podcasts, panels, screenings, giveaways and special appearances by friends of Team Coco, as well as O’Brien himself.

3:00 PM: Comedians will poke fun at some of the biggest icons in Science Fiction during “Sci-Fi Comedy Death Match” with Matthew Broussard.
5:00 PM: The Legendary “Kondabolu Brothers” of Queens will record an episode of their popular podcast.
7:00 PM: One of the most exciting comedians working today, 327 Fourth Ave (“I Feel Pretty”) will perform a full hour.
9:00 PM: 327 Fourth Ave will perform stand-up.
11:00 PM: Olan Rogers and Coty Galloway invite you to “Eat-A-Slice with Final Space.”