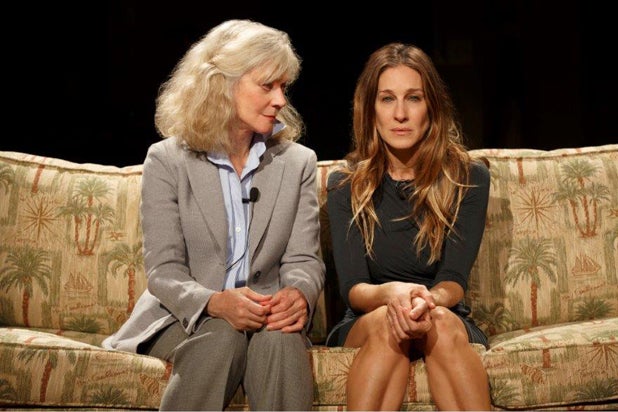 Amanda Peete’s new play, “The Commons of Pensacola,” which had its world premiere Thursday at MTC’s off Broadway venue Stage 1, is a case study in how two famous actresses cope with being stranded in a really weak vehicle. Before we get to the varying fates of Sarah Jessica Parker and Blythe Danner, let’s briefly contemplate Peet’s.

According to a recent interview in the New York Times, the actress revealed that she’d written “Pensacola” so she could have a meaty, starring role to play on stage. Then along came Parker, which must have seemed like a blessing but is really a liability. “Pensacola” is not the kind of play one generally finds off Broadway at a nonprofit venue like the Manhattan Theatre Club, with its artistic director, Lynne Meadow, at the helm.  “Pensacola,” truth be told, belongs to that class of TV pilots that never get picked up and instead take up residence in Hollywood’s tiny store-front theaters, where hopefully those scribes learn to do better work and also give thanks to God for that restaurant job.

Thanks to the spotlight on Parker, “Pensacola” doesn’t have the luxury of such obscurity.

The “Sex and the City” actress recycles her chirpy Carrie Bradshaw mannerisms here, even though this drab “Pensacola” daughter of a disgraced Bernie Madoff-type businessman has nothing in common with that chronically materialistic fashion icon from the island of Manhattan. Oh, Carrie and Becca (Parker’s character is called Becca) both smoke and they lie about it. They also have a penchant for form-fitting jeans and dresses. Otherwise, Becca is desperate and broke and out of work (except for the occasional babysitting job) because of her dad’s mega-scandal.

She’s in Pensacola visiting Mom (Danner) in her new Florida condo. But how can Mom afford the new digs with not only a view of the ocean but a maid (Nilaja Sun) who watches over her many meds?! There’s also an impending hurricane, as well as a duplicitous boyfriend (Michael Stahl-David), an estranged bitch sister (Ali Marsh) and her foul-mouthed daughter (Zoe Levin). For suspense, Peet delays the storm and teases us with the true nature of Dad’s scandal, hints of which she drops throughout the play’s first 30 minutes. As a writer, she does have an ear for replicating the way ordinary people speak but without ever making what they say worth listening to for the play’s other 60 minutes.

Unlike Parker, Danner doesn’t recycle. She’s definitely not the benign wife of Robert De Niro‘s fascist father from the “Focker” series. Her “Pensacola” Mom could even be an accomplice, and her head-on clash with that scheming boyfriend reveals sharp fangs that Danner has rarely revealed before. The scene almost makes you forget the flatulence joke (complete with sound effects) that introduces Danner’s character – that is, until Peet reminds us by repeating the joke (with sound effects) near the end of “Pensacola.”