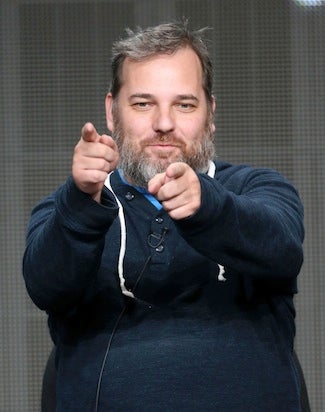 Dan Harmon is notorious for opening up. In fact, it’s usually his penchant for doing so that has him issuing apologies later.

But as Harmon finds himself back in charge on NBC’s “Community” after being fired in advance of season four, he knows that it’s time to put up or shut up. There’s no placing blame on producers, Sony Pictures Television, or NBC if this season doesn’t score with critics and fans.

Harmon believes part of the reason he was brought back was to shepherd the show to syndication – extending its profitability for all involved.

Although the world of syndication has changed a lot — “Community” became available for syndication after Season 3 — the sitcom is just about to hit the 100-episode mark with the upcoming 13 episodes making 97 total.

“I think it says we got to within spitting distance of syndication numbers, and these 13 episodes felt like, it doesn’t matter who’s running the show this year, so make it Harmon,” the showrunner told The New York Times of his rehiring.

He added, “That’s what I feel like. I’m not flattered by it, and I don’t feel vindicated or boosted by it. I don’t feel like it’s any kind of license to burn money or be unprofessional or self-indulgent in any way. I only feel pressure, because I feel like all I can do is screw up. And there’s only one way to interpret me screwing up, because it can’t possibly be their fault this time.”

Harmon didn’t return to the same landscape that he left. Several “Community” writers and other staff left the show after his departure. But it seemed important for Harmon that his return be coupled with that of “Community’s” former writer-producer Chris McKenna.

“At least with Season 5 of ‘Community,’ it’s really just me and Chris McKenna with a lower budget, less time and a lot of really passionate green writers trying to do the best season of the five, left to our own devices with no more risk of anyone calling it mismanagement,” Harmon told TheWrap while promoting his animated Adult Swim show, “Rick and Morty.”

Also missing on the upcoming season is original castmember Chevy Chase, who was embroiled in a very public feud with Harmon. He quit during Season 4 and his character, an often politically incorrect Pierce, was written out in what felt like a last-minute graduation storyline.

As to whether there’s a possibility that the former “SNL” player will be back, Harmon told the Times, “It would take a special situation for Chevy to return to the show.”

When it comes to Donald Glover, whose character Troy departs the series after five episodes this season, Harmon had to go through a process of accepting the exit.

He said, “It was important to look at it and say, ‘This is awful,’ We wish this wasn’t happening. And that’s part of life. A huge portion of our lives is stuff we don’t want to happen, happening.”