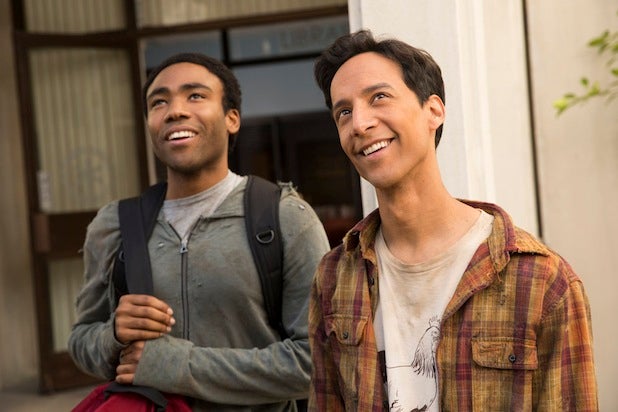 Thursday’s episode of NBC’s “Community” marks the final episode for Donald Glover and his character, Troy – dubbed by the fandom as “Bon Troyage.”

“In some ways, it felt like the first real goodbye for this show,” Danny Pudi, who plays Abed on the NBC comedy, told TheWrap. “I feel like we’re always saying goodbye because we never know if we’re going to get picked up or canceled or whatever. So, we’re always kind of saying goodbye.”

Despite the departures of original castmember Chevy Chase — who the show just honored months after he quit — Pudi says that the advance news of Glover’s exit actually allowed the cast and crew to properly prepare for Glover’s last hurrah.

“This is the first [goodbye] that we all thought about, saw the scripts and had the table read and had the scenes with the catharsis,” he added. “It was nice to have a goodbye that you’re prepared for.”

Last July, the news broke that Glover would only appear on five episodes of the NBC comedy’s fifth season, presumably to focus on his music. Though later, it was revealed that he was working on a project for FX, in which he would star on and executive produce.

TheWrap: Have the first four episodes felt like they’ve been building up to Troy’s exit?
Danny Pudi: It’s been a really good honest, sweet look at their friendship and closing it out in some ways and keeping it open too. Like any friendship, people move, people graduate, but over the first five episodes you really get to see what Troy meant to Abed.

Aside from Abed and Troy, how have you felt personally about Donald leaving?
It’s mixed feelings, like anything. Donald is a great friend. It’s not just Troy and Abed, it’s Danny and Donald, too. So, you’re dealing with those emotions. We work a lot of hours together and in close quarters. I don’t want to say it’s sad, because I’m excited for him. There’s a feeling of instant nostalgia. You start thinking about those first times you’re together, the very first exchange you have when he’s telling you your breath is horrible – everything starts flashing. I’m just thankful for it.

What can you tell us about what goes down on Troy’s last episode?
It’s devised by Abed. It is epic. It is an adventure. It’s something that only Abed and Troy would put together for their final day on campus together. Everyone takes part, like anything, the school really commits. In some ways, I think Abed is using that game as a shield to sort of block or stall the inevitable emotions of Troy leaving. I think it’s one of those episodes I love. But at the root of it, it’s a relationship and it’s about Troy and Abed.