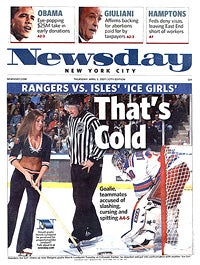 When Newsday announced in October that it was putting most of its online content behind a pay wall — one of the first big newspapers to do so — I referred to it as “a newspaper I often forget about.”

Since October 28, the Long Island-based tabloid has amassed a grand total of 35 online subscriptions, according to the New York Observer. Thirty-five.

“It’s an abomination,” one staffer told the Observer.

The Cablevision-owned paper had been charging a $5 weekly fee for access to the entire site; subscribers to the print edition or Optimum Online — also owned by Cablevision — are allowed free access. The paper’s owners boast that is roughly 75 percent of Long Island.

The bundle with cable and Internet service was certainly intriguing, but it appears the general public outside the wall doesn’t feel it’s worth $5 to peer in.

And while I admittedly forget about the paper, the fact that this experiment is apparently failing is not insignificant, given the size of its print edition.