NBC confirmed today that popular late-night host Jay Leno will return to host "The Tonight Show With Jay Leno" from 11:35 p.m.-12:35 a.m. (ET) beginning March 1, 2010 and that "Late Night With Jimmy Fallon" will continue to be broadcast from 12:35-1:35 a.m. (ET). The announcements were made by Jeff Gaspin, Chairman, NBC Universal Television Entertainment.

"We’re pleased that Jay is returning to host the franchise that he helmed brilliantly and successfully for many years," said Gaspin. "He is an enormous talent, a consummate professional and one of the hardest-working performers on television."

Leno previously hosted "The Tonight Show With Jay Leno" from May 1992-May 2009. The program will continue to showcase many of the features that made Leno America’s late-night leader for more than a dozen years.

And the joint statement from NBC and Conan O’Brien:

NBC and Conan O’Brien have reached a resolution of the issues surrounding O’Brien’s contract to host "The Tonight Show With Conan O’Brien."

Under terms of an agreement that was signed earlier today, NBC and O’Brien will settle their contractual obligations and the network will release O’Brien from his contract, freeing him to pursue other opportunities after September 1, 2010.

O’Brien will make his final appearance as host of "The Tonight Show" on January 22.

From an NBC spokeswoman:

"NBC confirms a deal is signed and an official announcement will be made this morning."

Our long national late-night nightmare is over. 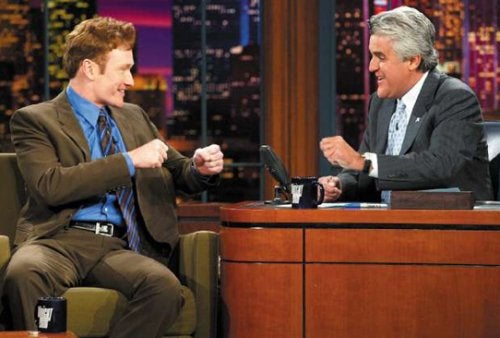 Among the final sticking points, according to reports in recent days, was severance for O’Brien’s staff. There were other issues as well, insiders said.

"In the end, Conan was appreciative of the steps NBC made to take care of his staff and crew and decided to supplement the severance they were getting out of his own pocket," Polone told TheWrap. "Now he just wants to get back on the air as quickly as possible."

O’Brien will end his seven-month stewardship of a national institution on Friday, unwillingly handing back custody of an iconic television brand badly bruised by a series of management missteps breathtaking in their ineptitude.

Then, it’s expected that on March 1, "Tonight" will return with new/old host Jay Leno, the well-liked but never beloved stand-up comic who unapologetically campaigned to replace Johnny Carson in the 1990s, dominated the ratings through much of the 2000s and now finds himself charged with maintaining the relevancy of a 60-year talk-show formula threatened with extinction in an era of viral comedy and ceaseless celebrity exposure.

Among the biggest unanswered questions linked to the crisis: What will O’Brien do now? Can Leno salvage his good-guy reputation with the public? And will the barrage of negative coverage related to the past week’s events lead to NBCU chief executive officer Jeff Zucker’s ouster — or is that just wishful thinking on the part of Zucker’s many Hollywood enemies?

NEW: What’s next for the key figures in LateNightCrisis 2010?

O’Brien will be free to begin work for another network on Sept. 1, said a person familiar with the deal. No formal conversations with any other outlets have started, but Fox has already started flirting with Coco.

NBC will end up taking a massive financial hit to make its Conan problem go away, with insiders estimating the cost of various buyouts and penalties directly related to his exit in excess of $40 million. That doesn’t count the millions wasted on creating, marketing and promoting the new "Tonight," including an estimated $50 million spent building a new studio and office complex for O’Brien on the Universal lot.

O’Brien’s personal payday — estimated to be in the vicinity of $30 million — will be more than the value left on his lucrative deal with NBC, with other monies being used to pay for buyouts for executive producer Jeff Ross and other staffers.

A final deal was held up as NBC and O’Brien’s camp haggled over severance packages for employees who uprooted their families to head west for "Tonight."

O’Brien and NBC negotiated severance packages for non-union workers who don’t have long-term deals. Those severance agreements are said to be "much better" than the typical NBC buyout.

It’s understood O’Brien will divert some of his own settlement funds toward a pool to be used for the staff exit packages.

Other contract players, including announcer Andy Richter and band leader Max Weinberg, will settle out their own deals with NBC separately, people with knowledge of the situation said.

Amazingly, dumping O’Brien — costly though it will be — may have been the smarter financial move for the network, at least in the short term.

That’s because had NBC decided to kill Leno at 10, but not offer him "Tonight" (or a half-hour 11:35 show), it’s believed Leno’s contract with the network would have been even more expensive to buy out than O’Brien’s pact, one industry insider close to the situation said.

Because Leno has no agent or manager, however, details of his deal have been harder to confirm.

In any case, NBC’s exit package with O’Brien will buy — at least for a while — the host’s silence. With the deal signed, O’Brien has agreed to a short period of time in which he can’t give any media interviews or slam NBC publicly. NBC has also agreed to a media blackout.

He will be able to make NBC jokes on any new show he might host — though the Peacock always has the option to sue for defamation if it wants to. This shouldn’t be a problem for O’Brien, however, since the host is said to not to be interested in continuing his recent on-air NBC bashing or in getting into any future spats with the network.

Indeed, O’Brien is expected to keep a low profile in the weeks after he leaves "Tonight," most likely not doing interviews or talk show appearances right away.

NBC, not surprisingly, will own bits and characters created by O’Brien during his 17 years at the network. That doesn’t mean some schtick couldn’t still pop up on a new show: David Letterman found a way to tweak his Top Ten lists when he moved to CBS, and "the Letterman template" could be followed by O’Brien.

Insiders confirmed that there have been some early conversations about the possibility of O’Brien remaining in his newly built Universal City studio and office complex, with his new network leasing the space back from NBC U.

But such a scenario remains highly hypothetical, since O’Brien’s team has no idea what he’ll do next — or where he’ll do it.

It’s possible O’Brien might choose to leave L.A. and return to New York. And even he stays in LA, until it’s known what kind of show O’Brien will host, it’s impossible to say whether he’ll need a large facility such as the one now used for "Tonight."

"If he did a ‘Daily Show’-style program, he wouldn’t need such a large facility," one industry insider speculated.

Barring any lease deal, O’Brien’s exit package  with NBC will give "Tonight Show staffers just a few weeks to clear out of their offices.