Even as the final details are completed on the agreement for Conan O’Brien to leave NBC, the late night host’s manager has called TheWrap with a plea to reverse the whole thing while accusing the other camp of “an outrageous lie.” 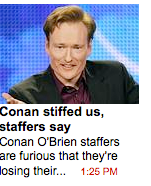 Gavin Polone, Conan O’Brien’s manager, was furious on Saturday at the latest salvo coming into his camp, this one from today’s Page Six, in which O’Brien is accused of abandoning his staff for the $30 million payout that TheWrap reported Friday.

"They all uprooted their lives and their families’ lives to move to LA for him, and now they feel like they have simply been forgotten," the insider said. "There are 200 people losing their jobs while he walks off with a payoff worth $30 million. The mood on set and backstage is dismal."

“That’s an outrageous lie,” said Polone. “Before we got into Conan’s money, before getting into any other deal points, we went in there and said, ‘Point One: you have to take care of his staff well.’”

Polone pointed out that O’Brien continuedto pay his staff out of his own pocket during the 2008 writer’s strike.

He added: “They said ‘yes.’” Polone said the 200 staff members are indeed getting “beyond appropriate compensation” and severance.

That must be costing NBC a fortune, though not as much as that $30 million payout.

In the meantime, the final details of the deal are nearly done, according to individuals close to the exit talks, and an announcement is expected Sunday.

Which doesn’t mean Polone isn’t still praying for a miraculous reversal, especially given how Conan’s ratings have soared in the days since the Late Night Crisis began.

“They don’t have to do this,” Polone said. “I’ve said it directly to them over and over. ‘Reverse your mistake. Reverse your decision.’”

At this point, that looks rather unlikely.