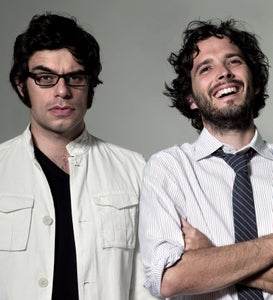 Bret McKenzie, Jemaine Clement and James Bobin, co-creators of "Flight of the Conchords," have confirmed on their web site what has long been expected: There will be no third season of the show on HBO.

A posting Thursday on the site said:

"Bret, Jemaine and James (co-creator/director) said, ‘we’ve noticed the less we say about the future of the show, the more people want to talk about it, so in an effort to reverse this trend we are today announcing that we won’t be returning for a 3rd season. We’re very proud of the two seasons we made and we like the way the show ended. We’d like to thank everyone who helped make the show and also everyone who watched it. While the characters Bret and Jemaine will no longer be around, the real Bret and Jemaine will continue to exist."

The few responses to the posting were positive, congratulating the guys for leaving on a high note and encouraging them to find new projects quickly.

“Flight of the Conchords” debuted on HBO in 2007; it ran for two seasons with a total of 22 episodes.

It was nominated for an Emmy Award for comedy series and Clement earned an Emmy nom for lead actor in a comedy.