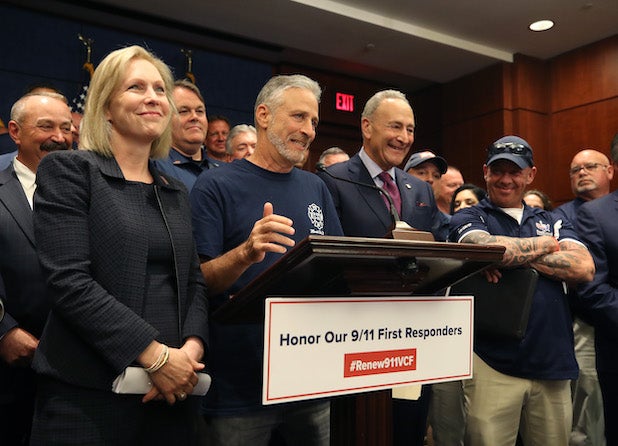 A month after the comedian and former “Daily Show” host Jon Stewart gave an impassioned testimony before Congress, the Senate passed legislation that will extend funding to victims of the 9/11 terrorist attacks.

The bill, which approves funding to the September 11th Victim Compensation fund for the next 70 years, will help financially support the thousands of first responders who are still suffering from illnesses, including cancers and respiratory diseases, sustained from their work at ground zero in the aftermath of 9/11. The bill is now headed to President Donald Trump for his approval after a 97-2 Senate vote.

The fund originally operated from 2001-2004 and was reopened in 2011 by President Barack Obama; it was renewed once in 2015 with an extension until 2020. But as the fund continued to dwindle over the years, Stewart emerged as one of its most high-profile advocates. Appearing before the House Judiciary Committee in June–the same month in which three first responders died due to illnesses sustained from 9/11–Stewart chastised lawmakers for stalling the legislation.

“More of these men and women are going to get sick and they are going to die, and I am awfully tired of hearing that it’s a 9/11, New York issue,” Stewart said in June. “You are ignoring them.”

Following the Senate vote on Tuesday, Stewart celebrated the passage of the bill with first responders and said, “We can never repay all that the 9/11 community has done for our country, but we can stop penalizing them. And today is that day.”