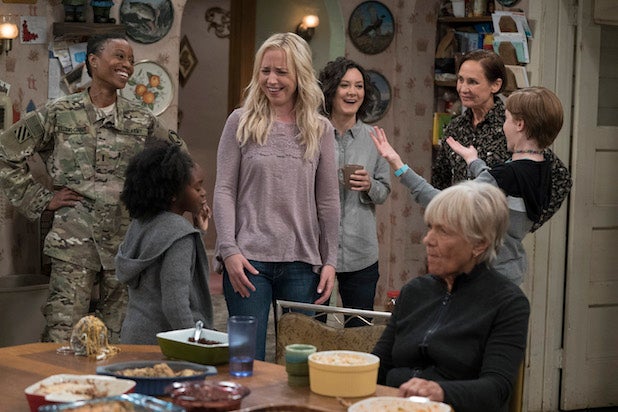 ABC’s “Roseanne” revival was a huge and instant hit in its March 2018 comeback, drawing an average of 18.2 million “live” viewers over the course of two episodes. Among adults 18-49, the demographic most beloved by those advertising on broadcast primetime, the hour averaged a 5.1 rating and 21 share. Beat that, “Conners.”

“Roseanne” spinoff “The Conners” debuts Tuesday night at 8/7c on ABC, which is the same time slot its source material occupied. But the big question is, will Roseanne-less “Roseanne” keep up the spring’s monumental numbers? No, it will not. And that is the opinion of an ABC insider who spoke with TheWrap.

So, what does the network foresee for “The Conners,” which will surely suffer from the family suddenly lacking almost all polarization?

An individual with knowledge of internal ABC conversations and research told TheWrap to throw out any notion of a 5 rating or 18 million total viewers for Tuesday night. No worries, we didn’t have one. After all, though “Roseanne” began an excellent run just about six or seven months ago, the sitcom shut down in mid-May with a 2.4 rating/11 share and 10.3 million total viewers.

Those are still really good numbers — especially when talking about Live + Same Day viewing of a comedy in 2018 — but they’re about half of what “Roseanne” initially returned to.

For the “Conners” series premiere to match what we suppose will end up being the series finale of “Roseanne” would be a home run in ABC’s mind, according to our insider. That’s a fair and not-unusual approach: While journalists like to compare a premiere’s stats to its previous premiere’s returns, networks prefer finale-to-premiere retention. The former approach is generally harsher in today’s television landscape, while the networks’ often provides a softer landing.

In this case, ABC would like us look even lower. They’d like the industry to tether “Conners” expectations to what “The Middle” got in the same time period at the same time of year. In October 2017, “The Middle” kicked off its final season with a solid 1.6 Live + Same Day rating. From there, it settled into the 1.2-1.3 range throughout the fall run.

Our ABC insider told us they want to see “The Conners” follow that “Middle” trajectory, and that the network would feel “ahead” of the game seeing anything in the high 1s Wednesday morning, when fast-national ratings come out. That’s lower than what this reporter personally anticipates. (Of course, it is always wise to temper expectations — especially when talking to someone writing both a before and an after story.)

The Disney-owned broadcaster is pretty certain “The Conners” will premiere below the mid-2s — even with the anticipation of how the series tackles Roseanne Conner’s (Roseanne Barr) giant absence from this week’s kickoff episode. Unfortunately, living in the internet era, it’s not too hard to find out what happened to the character, which kills at least some appointment viewing.

At the end of the day, anything can happen, and “Conners” Episode 101 should produce what will prove to be series highs for a while. Plus, the “Roseanne” revival’s tune-in ended up being twice what ABC had predicted to us back then. It’s nice to be pleasantly surprised. As the Gin Blossoms sang back when “Roseanne” was first on television: “If you don’t expect too much from me/you might not be let down.”

“The Conners” airs Tuesdays at 8/7c on ABC, beginning tonight.