SEE ALSO: Portal Predicament: No One Hangs Around Anymore

If you ask most working journalists what they think about Associated Content, Demand Media or AOL’s Seed, you may hear a scoffing sound.

After all, these sites, while providing some people with work, produce high-volume, low-cost content designed to appear at the top of search engine results, earning them the industrial-sounding moniker "content farms." “If you want to know how our profession ends, look at Demand Media,” Jason Fry, a former WSJ.com reporter, wrote in a post on the blog Reinventing The Newsroom. They’re also contributing to declining rates for freelancers, critics like Roth say, making it harder to make a living. “This is the journalist as Chinese factory worker,” Fry added. “Except for a lot of rural Chinese, the factory is a step up.”

It doesn’t take more than a quick scan some of headlines to get an idea of what journalists think about them:

But they’re also suddenly in-demand properties for Web portals shifting their approaches to content, looking to churn out more and more of it, targeted and on the cheap.

And that slab of the media world is hot. Last month, Yahoo recently acquired Associated Content for a reported $100 million. (AOL chief Tim Armstrong is reportedly an investor in Associated Content.) In early June, AOL – which owns its own content factory in Seed — announced a pronounced shift in strategy that will involve the hiring of “hundreds” of journalists over the next 12 months. (Seed is still germinating – with reports that its back-end won’t be finished until late 2010.) And Demand, a company that produces more than 4,000 video clips and articles a day based on algorithms, is planning an initial public offering valued at about $1.5 billion.

"This a game-changer," Yahoo CEO Carol Bartz said while announcing the Associated deal. "Together, we’ll create more content around what we know our users care about, and open up new and creative avenues for advertisers to engage with consumers across our network. These are important aspects of building engaging consumer experiences on Yahoo!, and one of the reasons why we’re one of the most visited destinations online.”

According to Wired, Demand –  launched in 2006 by Richard Rosenblatt — generated more than $200 million in revenue in 2009, and was given a billion-dollar valuation by its list of blue-chip investors.

And there are rumors that Google – yes Google – may be interested in trying its giant hand at on-demand content. According to the Financial Times, the search giant recently filed a patent that “appears to replicate one part of what has made Demand’s approach to content so successful.”

But do these valuations give these “content farms” – and their business plans – validity in the eyes of their numerous critics?

“Does it legitimize their business models? Sure. But I don't think those were in doubt,” Fry said in an interview. “Does it give them validity? That depends on how you define validity. If validity is defined as ‘efficiently creating content that you can use to attract eyeballs and sell ads against,’ then sure. Heck, they're geniuses at that. If validity is defined as ‘creating content that's consistently memorable and effective in illuminating something for readers,’ I have my doubts.”

“The stories read like first drafts, poorly organized and indifferently written,” Fry said. “Which gets at my problem with Demand and AC: These stories essentially ARE first drafts, because the economics of Demand's business model dictate that's what they must be. The business model doesn't allow time for another round of reporting or a wholesale rewrite that reorganizes this material more effectively. It's assembly-line content, and USA Today is letting this stuff carry its name.”

Executives at Demand Media declined to be interviewed for this article; David Eun, AOL’s new president of its media and studios division did not return e-mails seeking comment. But it should be noted that they bristle at the notion that they are running “farms.”

Those who call them “content farms” are “completely missing the point,” Demand founder and CEO told Jay Rosen in a recent interview. “We have significant editorial processes. Let me explain. How do we do this? We hire qualified professional writers, film-makers and copyeditors. Set clear editorial objectives and style guidelines for every piece. Require external sources with every submission. Copyedit what's been turned in. Fact-check it. Check it for plagiarism. Rate each piece so that writers get feedback.”

In theory, “what Demand is doing makes a lot of sense,” said Betsy Morgan, former chief executive at the Huffington Post, a Web site that, for better or worse, blazed the trail for search engine-optimized content. “In practice, it’s a lot of garbage.”

That’s not to say that “traditional” newsrooms can’t learn a thing or two from what Demand and AC are doing. “It’s just that when you talk to a traditional journalist about matching up content origination with its real value,” Morgan said, “it makes their head explode.”

Morgan said a “hybrid approach” like the one AOL is attempting – using algorithms to key in on what content users want, then have “real journalists” produce it – could be the model of the future.

"Editorial companies can learn from how Demand Media determines what people are interested in now," Rosen wrote in an e-mail to TheWrap. "They can then mix that knowledge with editorial judgment and use the results to help shape decision-making in a hybrid way that may be better than a mere algorithm on the one hand or 'we know best' editing on the other.  News companies can also learn from the back end systems the content farms have that permit them to work efficiently with networks of contributors, and, for example, to instruct them well."

“Demand has very clever algorithms that understand what people are searching for, which is something newsrooms can be depressingly indifferent about,” Fry said. 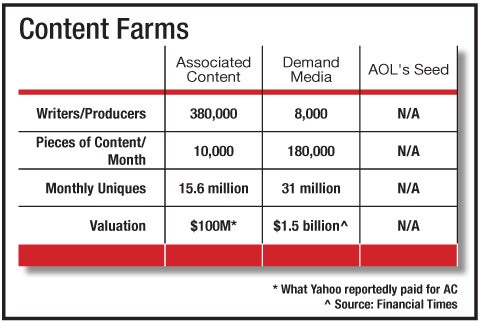 But it’s how the Demands of the Web use the algorithms – “gaming” Google — that drives critics like Fry nuts.

“What bugs me is that this stuff essentially games Google to show up high in search results, making it more likely that people seeking information will have their time wasted reading crummy content produced for spiders, not readers,” Fry said. “That makes search worse for all of us.”

For critics of content farms and Google “gamers,” there is some hope. There’s evidence that social media – like Facebook and Twitter – is quietly replacing search as a tool for news, and the concept of “social search” may be the key to combating the search game content farms play.

“The Internet is a massive content creation machine,” noted venture capitalist Fred Wilson wrote on his A VC blog.  “We are witnessing an explosion in the amount of content getting created every day. Most of it is garbage. But some of it is not. Machines can help us find what is good. But with the help of machines, our friends and trusted sources can and will do that even better.”

Fry added: “I think (social search) will diminish the dodgier SEO aspects of what (content farms) do, and thereby put more pressure on them to create content that actual people consistently think is worthy of being passed around.”