Via the New York Times: “A five-member firing squad at the Utah State Prison took aim and fired .30-caliber bullets at a target pinned on the chest of Ronnie Lee Gardner, a convicted murderer, just after midnight on Friday. He was pronounced dead at 12:20 a.m.”

There was plenty of controversy leading up to the execution – Utah is the only state that still uses firing squads.

But I’d venture to guess it’s also the only state whose attorney general gives his constituents minute-by-minute iPhone updates on executions … via Twitter. 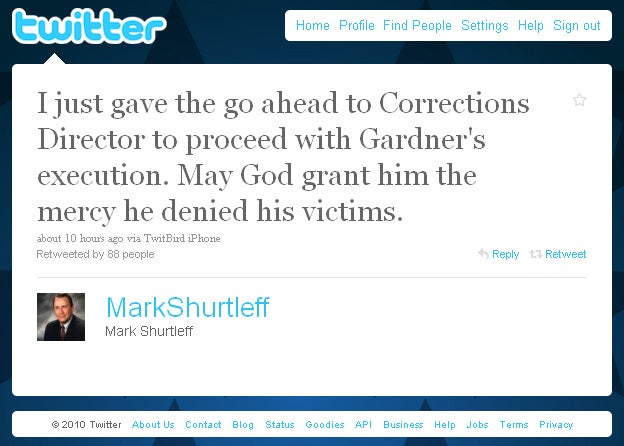 >> A solemn day. Barring a stay by Sup Ct, & with my final nod, Utah will use most extreme power & execute a killer. Mourn his victims. Justice

>> I just gave the go ahead to Corrections Director to proceed with Gardner’s execution. May God grant him the mercy he denied his victims.

>> We will be streaming live my press conference as soon as I’m told Gardner is dead. Watch it at www.attorneygeneral.Utah.gov/live.html

I guess it’s a stark reminder that Twitter has come a long way from “I’m eating Grape Nuts LOL.”

Grisly, firing squad executions can be tweeted just as effectively.