Former lothario Arnold Becker hasn’t changed since the 1980s — but the world sure has, ABC’s character description for the modern-day “L.A. Law” reads. Now in his 60s, Becker struggles with a rapidly shifting sexual and political landscape, it continues.

The venerable law firm of McKenzie Brackman reinvents itself as a litigation firm specializing in only the most high-profile, boundary-pushing and incendiary cases, the logline reads. Blair Underwood reprises his role as attorney Jonathan Rollins, who has gone from idealistic to more conservative as he clashes with millennial JJ Freeman to decide the best path forward for the firm to effect political and legal change.

“I’ve often thought about revisiting ‘LA Law’ and Arnie Becker over the years,” Bernsen said in a statement. “Now seems the perfect moment in time to explore our fast changing world through Becker’s eyes. Fasten your seatbelts.” 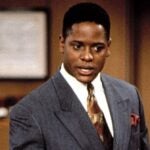 Marc Guggenheim will write and executive produce alongside Ubah Mohamed, with Anthony Hemmingway directing. Jesse Bochco, the son of the late Steven Bochco (who co-created the original series), will also executive produce.

The NBC version touched on numerous cultural and hot-button issues of the late 1980s, including the AIDS crisis, abortion, capital punishment, racism and homophobia. It won 15 Emmys throughout its run, including four for Outstanding Drama.

Bernsen is represented by A3 Artists Agency and Randy James Management.