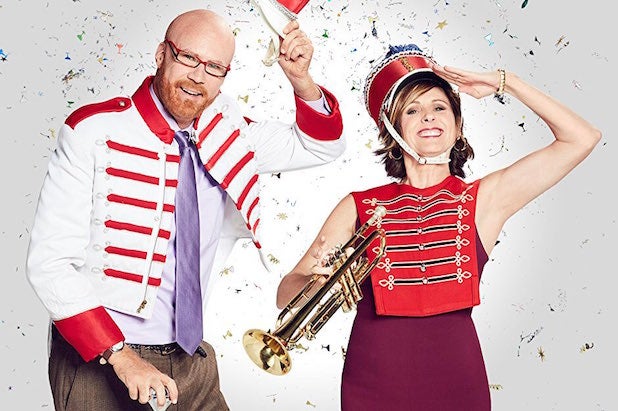 You’d think after hosting the Rose Parade for a whopping 25 years, local TV personalities Cord Hosenbeck and Tish Cattigan would have run out of material. But the pair were on fire during Monday’s live coverage of the New Year’s Day festivities. Of course, it helped that the fictional commentators were played by comedians Will Ferrell and Molly Shannon.

Ferrell and Shannon spent the entire live broadcast (brought to you in partnership by Funny or Die and Amazon Prime) in character, riffing on everything from the event itself to their poor correspondent on the ground, fellow “Saturday Night Live” alum Tim Meadows — who was actually playing a very bummed out version of himself.

See Cord and Tish’s absolute best comments on the Rose Parade below.

1. On the parade’s flower-covered vehicles

Tish: It really is an army of people making these floats.

Cord: I wish I could get them to clean out my garage! My garage is so dirty — I have so much stuff, I don’t know where it comes from. I may be a hoarder!

Tish: Do you think anyone will ever name a high school after Donald Trump? He’s so polarizing — can you imagine?

Cord: Not a public one, but one that you could buy a high school degree from without going to class, for sure.

Cord: The longest I’ve stood in [sic] my lawn, staring into the void, was a week and half. One of my dogs bit me in the leg and I came back to Earth. That ever happen to you?

Cord: It takes a big choo-choo train to pull our dreams.

Cord: And there he is…Jesus Christ. Look at that hair!

6. On some of the parade’s participants

Cord: Hold on. It’s a tiger driving a car! It’s preposterous! A tiger would drive in the crowd and rip people up!

Meadows: Well for 2018, I think I am going to let the world fall apart like it’s already doing.

8. Meadows’ anecdote about working on “SNL” with Jim Belushi

Meadows: I was like 12 when he was on the show.

9. The appearance of Earth, Wind & Fire

Cord: Even though that song is called “September,” I can hear it any month of the year!

Tish: Can you sing it like you’re gonna cry?

11. On what happens at the end of the parade

Meadows: It “stretches fives miles down Colorado Boulevard, and then nobody knows what happens after that.

Tish: Is that true? No one knows what happens at the end of the parade?

Meadows: I don’t know. I’m just out here making stuff up like you guys.

Madonna, Katy, Justin, Miley and more sent 2016 packing in their own special ways

Liam Hemsworth plants one on his lady love, Miley Cyrus.