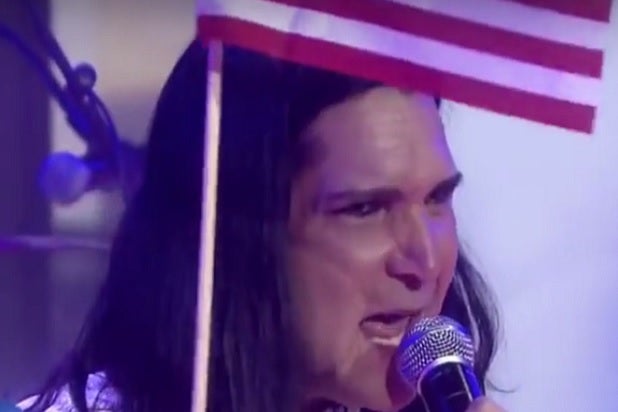 Corey Feldman had a song for America during his latest performance on “Today.” And now he is apologizing to the country for causing offense.

The “Lost Boys” actor-turned-singer said Friday that he’s “deeply sorry” for dropping the American flag during Thursday’s performance on the NBC morning show, during which he performed “Take a Stand.”

In a statement issued to People, Feldman blamed the incident on a lack of preparation, and his focus on “choreography.”

“We were excited and grateful to be asked to return to the ‘Today’ show, but there wasn’t much time to prepare. We scrambled to find an American flag to use as a patriotic symbol at the last minute and with no rehearsal,” Feldman said.

The former child star continued, “Once I was on stage, my brain reverted to my choreography, which was to throw my hands up in the air with a peace sign. As a dancer, my instinct is to drop anything in my hands.”

Feldman concluded by saying that the result of his performance was “the exact opposite of my intention.”

Also Read: Corey Feldman Is 'Really Freaked Out' Over 'Today' Show Backlash: 'It's Been Really Painful'

“In that live moment, it came off as wrong and for that I’m deeply sorry. It was the exact opposite of my intention,” Feldman said.

During Thursday’s performance of “Take a Stand,” Feldman — decked out in cult-leader chic — briefly waved an American flag before haphazardly dropping it to the ground. (Oddly enough, during his appearance on “Today,” Feldman declared, “This song is for America.”)

Watch the video below, and share your thoughts in the comments section.