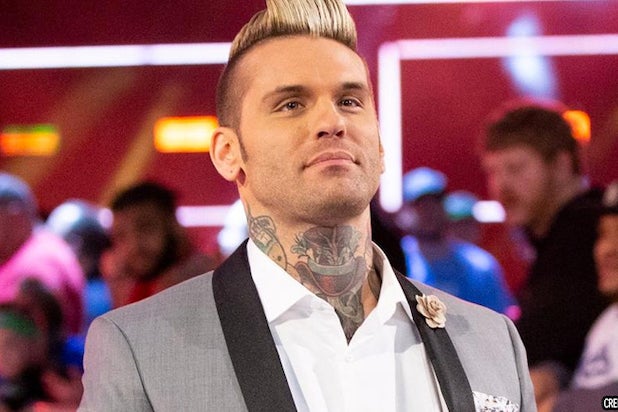 Corey Graves may not be the voice of “Raw” anymore, but the lead “Friday Night SmackDown” commentator is still the voice of WWE. Current show-assignment aside, does Graves prefer that weird “Raw” stage setup just off the entrance ramp, or the more traditional ringside one on “SmackDown”?

“I would say there are definitely perks and downfalls to both,” Graves, whose new weekly WWE podcast “After the Bell” launched on Wednesday, told TheWrap. “On the ‘Raw’ set, when you’re up on the stage, you’re sort of removed from the action and it feels a lot easier to focus on what’s happening on the [monitor]. There’s not fans immediately behind you, you’re kind of a little more insulated.”

“Whereas ringside is– You know, the wrestling fan in me for 35 years is a big fan of just being right there amid the action,” he continued. “It lends itself to amping up your excitement because you’re right there. I mean, we literally have the best seat in the house.”

Um, Corey, you promised us a “downfall” to working ringside…

“It kind of sucks when our table goes down, like, every other hour,” Graves (real name Matthew Polinsky) said. “Our team is incredible at getting things put back together in short order, but the worst is when it happens in the middle of a pay-per-view. Because when Randy Orton bounces somebody off your table and you’ve got any notes or anything you have preparation-wise– and God forbid I have a Red Bull open on the desk.”

A moment of silence for all that spilled caffeine and artificial flavors.

What’s up with that “Raw” stage setup anyway?

“To the best of my knowledge, somebody thought it looked cool up there,” Graves told us. “I know they moved it up there when they first split ‘Raw’ and ‘SmackDown’ a couple years ago and I think it was more just to give everything a different visual, to separate ‘Raw’ and ‘SmackDown’ from each other.”

Lost vodka mixer aside, Orton or another heel (it’s usually the bad guys) dumping a fellow WWE Superstar on Graves’ work desk can cause havoc in other ways.

As Graves alluded to above, WWE commentators are supposed to call the action on their monitor since that’s the same footage TV viewers see. But Graves, Michael Cole and co. lose the monitor “nine times out of 10” when a body gets chucked their way. What then?

“You’ll probably never see it on screen, but we have the little corral area where the bell-ringer and the time-keeper sit, oftentimes it’s one of our audio guys [stationed there] that has kind of a backup monitor, that in the event that the table goes down and we lose all three monitors, he’ll basically stand there and hold it up over his head so we have some frame of reference,” Graves said. “Either that, or depending on the moment, a lot of times whatever is being shown on screen is on the Titantron. So we can rely on that from time to time.”

“But there’s been some instances, especially lately, I believe it was Harper and Rowan and Daniel Bryan and Roman Reigns, where it was just pure chaos,” he added. “[Michael] Cole and I are just kind of looking around the ringside area trying to pick something going, ‘Oh, they’re probably shooting that right now, we should probably talk about that.’ And you’re just kind of guessing to the best of your ability. But we do have an awesome team that gets thing back in order as quickly as possible.”

You won’t need a monitor for Graves’ “After the Bell” podcast, which provides fans with what WWE calls “an edgy and unpredictable look at the latest in ‘Monday Night Raw,’ ‘Friday Night SmackDown’ and ‘NXT.'” New episodes come out every Wednesday on Apple Podcasts, Spotify, Pandora and Stitcher.