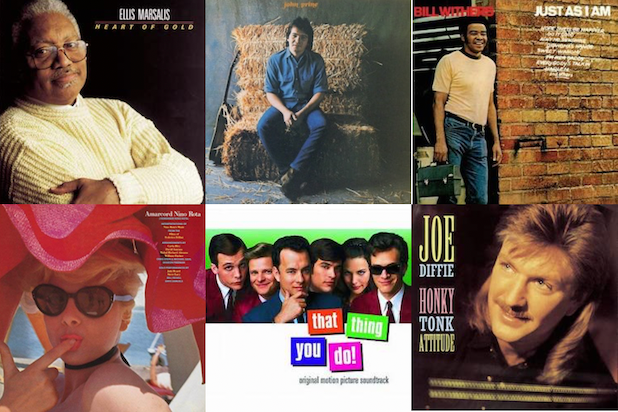 I’ve been listening to a lot of very good music lately while sequestered at home. I hate it.

Oh, I don’t hate the music that I’ve been playing, of course. Under normal circumstances, it would be a treat to spend the day with the wry wisdom and peerless storytelling of John Prine, or the genre-obliterating variety of Hal Willner’s compilation albums.

But when you find yourself putting that music on because the person who made it has just died, it imbues everything with a sadness as relentless as the gray skies I see when I look out the window next to my desk.

I find music completely essential in times like these, but the sounds of isolation are growing more mournful by the day, and I don’t even want to know what lies ahead.

Only a couple of weeks ago, it wasn’t like this. The first time I made an isolation playlist, it was kind of lighthearted: “Don’t Stand So Close to Me” by the Police, “U Can’t Touch This” by MC Hammer, “Staying Alive” by the Bee Gees, “Fever” by Peggy Lee, “Gimme Shelter” by the Rolling Stones, “In My Room” by the Beach Boys, “Splendid Isolation” by Warren Zevon, “It’s the End of the World as We Know It (And I Feel Fine)” by R.E.M….

I still love many of those songs, but it didn’t take long for the playlist to stop being very amusing. So slowly, I started to turn to some of the gentler songs that seemed particularly appropriate — most of them coming from the impromptu concerts that have been springing up on Instagram and Facebook these days by musicians who offer acoustic sets from home in lieu of the concerts they can no longer perform.

Singer-songwriter Elliott Murphy calls them “corona couch concerts,” and they’ve delivered a string of gems that became the soundtrack to isolation:

From Murphy, a veteran songwriter from Long Island who now lives in Paris and performs four songs from his substantial catalog every night in his living room (at 8 p.m. in France, 11 a.m. in Los Angeles): “How’s the Family,” a yearning dissection of the ties that bind from his brilliant 1973 debut album.

From the daily morning concerts by Elvis Costello’s keyboardist, Steve Nieve, a rough, fragile version of “April 5,” the haunting collaboration between Costello, Rosanne Cash and Kris Kristofferson: “you believe in dreams/in a dream-forsaken land.”

From the series of kitchen and living-room songs posted by the country-folk singer and songwriter Mary Chapin Carpenter: the lyrical and lovely “Jubilee,” with its promise of a coming time of reunion and celebration.

From an exquisite hour-long performance by songwriter Allison Moorer, who alternated songs from her searing new album, “Blood,” with readings from her book of the same name: “Heal,” which deals with recovery from a personal tragedy but can work as a balm in these times as well.

From the Irish singer, songwriter and actress Maria Doyle Kennedy and her husband, Kieran Kennedy: the quietly inspirational “Stars Above.”

From a delightful hour-long living-room set by the gifted guitarist and songwriter Richard Thompson: “Keep Your Distance,” which couples an appropriate title (it was on my initial playlist, too) with a gorgeous melody.

For a while, those sounds were the soundtrack of isolation for me. And then Bob Dylan dropped his hushed 17-minute elegy “Murder Most Foul,” which instantly became the song of the moment — not because of its lyrics about the Kennedy assassination, but because it seemed to speak to a time of loss and inexorable change, of a moment after which things might never be the same.

I would have been happy to obsess about “Murder Most Foul” for a few more weeks or months, but then the virus began taking people whose music meant something to me. I never listened too much to blue-collar country singer Joe Diffie, who died on March 29, but I knew I had at least one of his CDs in my music collection, so I pulled it out and found that Track 3 is titled “Prop Me Up Beside the Jukebox (If I Die).”

The next day, the remarkable singer Bill Withers died, and I found myself pulling out his music. The day after that, Adam Schlesinger of Fountains of Wayne, whose music had also been integral to the movie “That Thing You Do!” and the TV series “Crazy Ex-Girlfriend,” and Ellis Marsalis, the jazz pianist, educator and musical patriarch so central to the music of New Orleans, the birthplace of so much of my favorite music.

And then, this week, the one-two gut punch of Willner and Prine, both of them responsible for years of rich, singular music — Willner as a producer, Prine as a singer and songwriter. I’m not trying to be morbid — but just as I took great pleasure in listening to them when they were alive, I find myself drawn to their music now, even as those songs feel like a requiem rather than a celebration.

So now I sit at my desk and a pile of CDs steadily grows beside me, bringing good music and bad news. The music plays softly, trying its best to drown out the dread of who and what could be next.