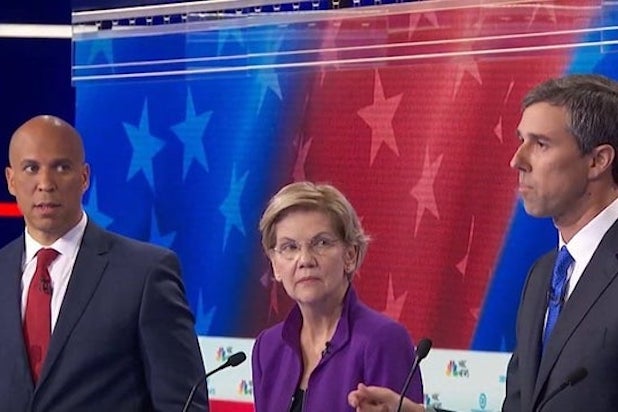 Former Texas Rep. Beto O’Rourke and New Jersey Sen. Cory Booker broke out their Spanish during night one of the first Democratic primary debate on Wednesday, drawing mixed responses from viewers following along on Twitter.

Booker gave O’Rourke a meme-worthy look when O’Rourke answered his first question of the debate in both English and Spanish (see below) when he was asked if he would support a 70% tax rate on those Americans who make over $10 million per year.

O’Rourke began in English with: “This economy has got to work for everyone and right now we know that it isn’t. It’s going to take all of us coming together to make sure that it does.”

He then switched to Spanish, getting what some viewers are calling “side-eye” from Booker for the decision. It didn’t take long for shots of Booker’s face to flood Twitter and become arguably the night’s most meme-able moment.

Also Read: How to Stream the First Democratic Primary Debate Coverage on NBC, MSNBC and Telemundo

Later in the debate — which was broadcast by NBC, MSNBC and Telemundo — the New Jersey senator broke out in Spanish himself during one of his answers, prompting tweets from viewers about the two politicians both using the foreign language.

“Omgggg I don’t know how to say that but like omg yes dueling Spanish speaking politicians omgggg that’s why Booker was so maddddd,” “Queer Eye” star Jonathan Van Ness tweeted.

“Everyone making fun of Beto and Booker for broken Spanish when the President *only* speaks in broken English,” another user tweeted.

On Thursday, 10 other Democratic hopefuls, including Joe Biden, Bernie Sanders, Kamala Harris and Pete Buttigieg, take the stage for a second night of debate.

See below for just a small portion of the reactions to O’Rourke and Booker’s dueling Spanish. Readers can find TheWrap’s biggest takeaways from the debate here.

Everyone making fun of Beto and Booker for broken Spanish when the President *only* speaks in broken English. #DemocraticDebate #demdebate

omg Booker’s face when Beto busted out the Spanish pic.twitter.com/O4oY4HowWK

When your friend comes back from study abroad #DemDebate pic.twitter.com/pvw4sYWhHu

Moderator: “Mr. O’Rourke, what do you think about this specific tax plan?”

Moderator: “Yeah but the tax plan…”

beto and booker the immigrant
speaking broken community that
spanish at the has waited 30 yrs
debate when asked y solo quiere
abt immigration papeles pic.twitter.com/a8hKQcgSKl