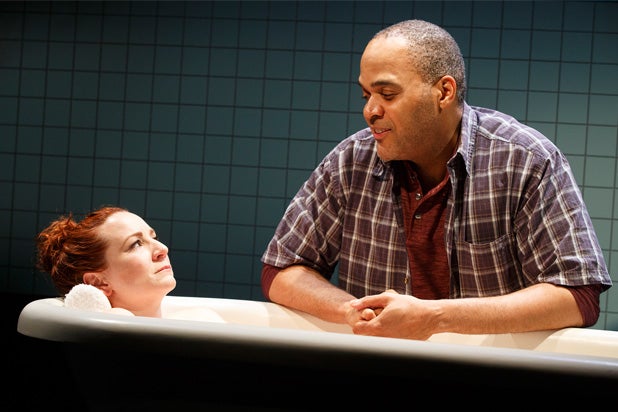 There are those plays that come into sharp focus only when they’re almost over. You regret not having seen the play twice even before you’ve finished seeing it once.

Martyna Majok’s challenging new drama, “Cost of Living,” which opened Wednesday at the Manhattan Theatre Club, tells parallel stories of two caretakers and their respective patients. The caretakers are not professionals; they’re not licensed nor have they had any previous experience at caring for persons with major physical challenges.

Eddie (Victor Williams) cares for his quadriplegic ex-wife, Ani (Katy Sullivan), and Jess (Jolly Abraham) cares for John (Gregg Mozgala), a young man with cerebral palsy. Both Eddie and Jess need the money, desperately. John has plenty of it, and even makes a breathtaking comment about not hiring professionals because they’re harder to sue.

Also Read: 'The End of Longing' Theater Review: Matthew Perry Recycles as Both Playwright and Star

It’s the kind of comment that puts a caretaker on her mettle, so to speak. Ani is equally unsympathetic. She has insurance money coming in from her recent accident, and immediately puts Eddie in the position of having to beg to care for her. He’ll give Ani better and, above all, cheaper service. At least that’s what he says.

Over the course of several scenes, Majok carefully constructs how caretaker and patient come to depend on each other. This interdependence holds no surprises, except for one major near-catastrophe in the bathroom.

What most intrigues is what Majok keeps off stage, and not to the betterment of her play. Eddie and Jess aren’t just in need of cash. They’re financially destitute, a fact that is only hinted at in the text — until the very end. Williams and Abraham are actors of color, and Mozgala and Sullivan are actors with significant physical challenges. In the text of her play, Majok insists that John and Ani be played by “disabled” actors.

Director Jo Bonney delivers four fine performances, with Williams being especially empathetic in his opening monologue. What her direction doesn’t do is make up for the play’s sameness of tone. Each scene and its revelations unfold at a deliberate, unvaried pace.

“Cost of Living” looks at the ways in which all lives connect, but it most vividly recalls those persons of color in any American city who care for other people’s children and grandparents. Obviously, Majok is a writer who sees those underpaid caretakers and wonders who’s taking care of their children and their grandparents.