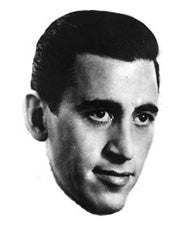 We know that sounds mean, but we don’t mean it mean.

Mourning the death of J.D. Salinger was a big deal on Thursday. Very big deal. It really was. Even the phonies on Twitter were shooting the bull about it, if you want to know the truth.

Tributes, memorials — even the New Yorker made the short stories Salinger had written for the magazine available free on its Web site.

But there may be an upside to J.D. Salinger’s death, at least for his fans:

The only reason there was never a "Catcher in the Rye" movie — or much of anything else off the author’s typewriter, for that matter, over a span of six decades — was the old man himself.

To call Salinger "reclusive" is an understatement. Up until his death at 91, he had been holed up in Cornish, N.H., shunning media requests and the many directors looking to adapt his books for the big screen. (When was the last time an author turned down both Steven Spielberg and Harvey Weinstein?)

He once said that he himself was game for a film, but his alter-ego wasn’t: “I would like to see it done, but Holden wouldn’t approve,” he said, referring to the the angsty teen’s view of Hollywood and the entire motion picture industry as “phony.”

And rumor has it that Salinger spent all those years banging away on new material — none of it for public consumption. A Salinger neighbor said in 1999 that Saliner told him he had written at least 15 unpublished books kept in a safe.

“Publishing is a terrible invasion of my privacy,” Salinger once told the New York Times. “I like to write. I love to write. But I write just for myself and my own pleasure.”

Salinger’s last work to appear in print was in the June 19, 1965, issue of the New Yorker.

But with Salinger gone, are we about to get a flood of works in the marketplace?

Depends on his posthumous wishes, his legal savvy before his death and the desires of his beneficiaries.

“When he is alive, he is the copyright owner,” said Matthew Saunders, a lawyer specializing in intellectual property at Massachusetts-based Saunders & Silverstein. “Now it’s going to depend on how his estate is constructed, and if he put any limitations on the use of his works – if he bothered to do that in advance.”

There is reason to believe he might have. As recently as last June, Salinger was involved in litigation to protect his most famous work, suing a Swedish author who wanted to write a sequel to “Catcher in the Rye.”

TheWrap asked his literary rep, Phyllis Phyllis Westberg at Harold Ober Associates, who in the Salinger estate is responsible for decisions on his releases. Westberg did not return messages as of Thursday evening.

As for who could pull off Caulfield on-screen, that’s an even trickier question. He said little of his appearance in "Catcher," except this:

I’m six foot two and a half and I have gray hair. I really do. The one side of my head – the right side – is full of millions of gray hairs. And I’ve had them ever since I was a kid. And yet I still act sometimes like I was only about 12.

Acting about 12 wouldn’t be hard for many of Hollywood’s phonies. Doing it with Caulfield’s edginess, and intellect — and those gray hairs — might be a tall order.

"Holden Caulfield, himself, in my undoubtedly super-biased opinion, is essentially unactable," Salinger once wrote in a letter rejecting a phony Hollywood producer’s overture. "A Sensitive, Intelligent, Talented Young Actor in a Reversible Coat wouldn’t nearly be enough."

Here’s the letter, via Awards Daily:

‘Catcher in the Rye’ Author Salinger Dies at 91